Side out: Injuries leave JHU volleyball team short on players, but not on determination

Blue Jays reschedule upcoming matches in hopes of getting healthy 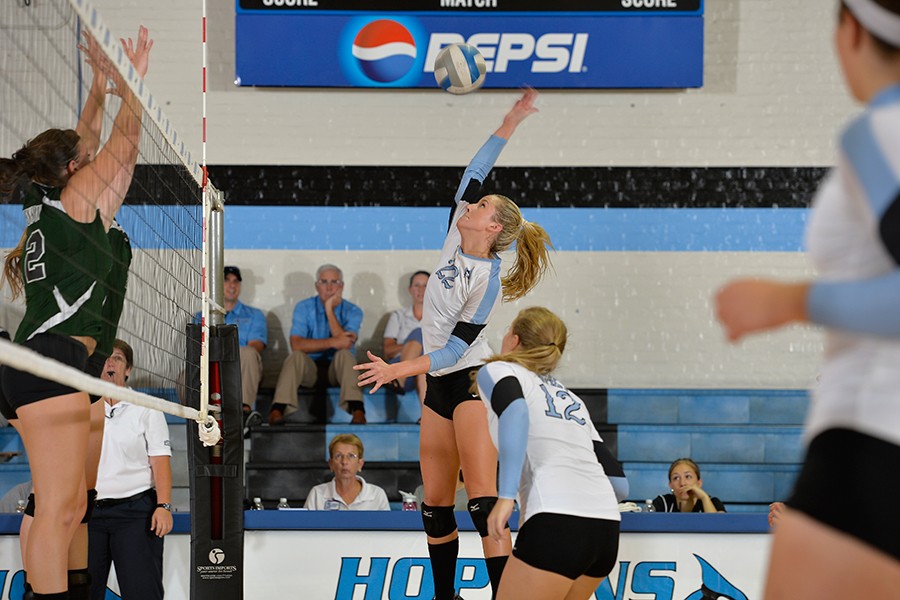 Image caption: Johns Hopkins senior Ali Cox goes up for a spike during a recent match against Franklin & Marshall.

In a recent match against Ursinus College, the Johns Hopkins volleyball team relinquished a three-point lead and trailed late in the third set at home. The Blue Jays had won the first two sets, the first comfortably (25-6), but stood poised to give away a game against a conference opponent. 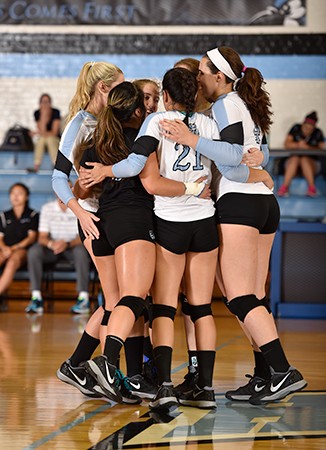 Image caption: A string of injuries have left the Blue Jays with fewer than the six players needed to field a full lineup.

Head coach Tim Cole stood on the sidelines and urged his squad on. He told them to "keep rolling" and stay focused. On any other day, Cole might have considered rotating in fresh players from his bench. But that wasn't an option. Substitutions are a luxury Cole doesn't have these days.

The Blue Jays dressed the minimum number of six players for the Ursinus match after a season-long string of injuries—and a massive case of Murphy's law—chopped the roster in half and jeopardized the remaining regular-season schedule.

An early omen of misfortune occurred in the preseason, when incoming freshman Esther Hong, a highly touted recruit out of California set to play the libero position, tore her ACL while playing for her club team during the summer.

The Blue Jays would lose two more players in the preseason, both to concussions. One player, freshman outside hitter Michelle Abt, got hit in the head with a deflected ball. Sophomore middle hitter Mereze Visagie had a ball smack her face while blocking.

Abt's eventual return to the roster was short-lived—she tore her ACL in training, landing awkwardly while attacking a ball. Not 90 seconds later, during the same practice, freshman middle blocker Sasha Gorelik suffered a concussion from a ball to the face.

"We lost two players in the span of about two minutes," Cole says. "I couldn't believe it."

Cole continued with the practice, although dialed down a bit. The squad, however, wanted to maintain the high-intensity workouts that they had grown accustomed to. "After the practice, a couple players were upset that we didn't work them hard enough," Cole says. "They wanted to get after it. They have shown they thrive on a challenge."

In a Sept. 30 match against Haverford, junior Ally Hirsch tore her ACL as she attempted to dodge the bleachers in pursuit of a ball. The most recent injury was to Carolyn Zin, a senior setter, who caught her hand in the net during practice and suffered an ACL tear as she landed off-balance.

At that point, the Blue Jays literally had lost half their opening-day roster to concussions or ACL tears. When asked to explain the injury epidemic, Cole says he doesn't have a good answer. He chalks up the injuries to freak accidents and unlucky bounces.

"I've been present for all of the injuries, watching each one as it happened," he said. "Girls get hit and fall all the time, but they mostly get up. It's just been a lot of bad luck. I know our training staff is as good as it gets, and the players are in tremendous shape."

Cole says he and assistant coach Jenn Feldman can only shake their heads.

"This is certainly the unluckiest year she and I have had together," Cole says. "We've never experienced anything like this." For comparison, last year the Blue Jays went into the season with a relatively small nine-person roster and had no significant injuries.

Cole says his squad has rallied in the face of adversity. After a rough start to the season—at one point they were 2-5—the Blue Jays have won three of four, the last two in straight sets, to improve to 9-9 overall and 5-1 in Centennial Conference play.

He says the response from the remaining healthy players has been fantastic. Several have had to play out of position and accept new roles. But Cole says the team was prepared for that. In practice, he typically makes the squad rotate positions, preaching all-around play. He adds that his roster features less specialization than those of other teams.

"I guess you could say it was the greatest contingency plan a coach ever had, or just a giant coincidence that we're prepared for a season where we lost so many players," Cole says. "[This season] has been something of an old school masterpiece. We've had girls play in all six positions. Every player now has to play every role. Some games that's meant an unconventional lineup of small girls in the front, taller girls in the back."

Cole says that sophomore Kristi Rhead might be the only setter/middle blocker hybrid in the country. Rhead has excelled in the new role and led the team in the straight-set victory over Ursinus, with 23 assists to go along with her five kills on nine swings. "She's added a whole new dimension to her game," Cole says.

The active players are probably slightly fatigued, Cole says, but have been helped by an 11-day break, an intentional rest period built into the schedule. Cole says he had hoped to get into this week battle-tested and ready to head into the final regular-season string of matches and the conference tournament primed and playing at their best.

"I think we would have nailed it if it wasn't for all the lightning strikes, but we're still in a good position if we can hold on," Cole says.

"If" is the optimum word. Following the Ursinus game, senior Stephanie Yokoyama showed signs of a concussion, likely resulting from an earlier collision with a teammate, and was ruled inactive. Now down to just five healthy players, Johns Hopkins had to reschedule its match with Dickinson College in Carlisle, Pennsylvania, originally scheduled for today, to Oct. 27. Two matches scheduled to be played Friday in Newport News, Virginia, have been canceled, and Cole says he's trying to reschedule another match scheduled for this week. He's hoping several of the injured players will be cleared to play soon, and has no plans to go door-to-door looking for able bodies or invite back any former players.

"We're ready to forge ahead with what we have," he says. "It wouldn't be fair to the girls who are here and committed to the team. I wouldn't want to devalue the role of a varsity student-athlete by bringing in someone who hasn't put the time in."

Sophomore Ali Cox says the close-knit team has bonded even more after the rash of injuries, and practices have remained upbeat and positive. Just smaller. Cox, an outside hitter, has mostly remained in her preferred position, although she, too, has had to adjust to new roles. "We've all had to be flexible," Cox says. "We've made adjustments to our games as time has gone on."

With no opportunity for a break, Cox says she and the remaining players will have to rely on their fitness and conditioning. "We've certainly gotten a lot of cardio on the court," she says.

Cole says this group doesn't have to worry about looking over their shoulders, or complain about lack of playing time.

"They're playing with a freedom that nobody is coming for their roles, or to replace them if they make a mistake," he says. "They're it."