Cancer "gene hunter" Kenneth W. Kinzler, co-director of the Ludwig Center at the Johns Hopkins Kimmel Cancer Center, is one of 80 new members elected to the National Academy of Medicine. 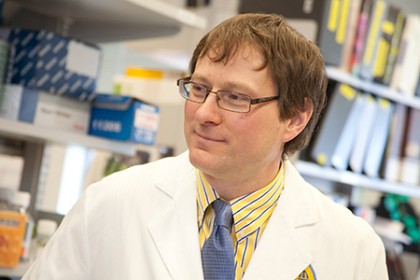 Members of the academy advise the U.S. government on medical and health issues. They are elected by their peers for their accomplishments and contributions to medical sciences, health care, and public health.

Kinzler has been recognized for his role in uncovering the genetic alterations linked to the initiation of colon cancer, one of the most common cancers worldwide; development of novel approaches for the molecular analysis of cancer; and more recently, for his role in deciphering the genetic blueprints of many types of cancer. He is consistently ranked among the most highly cited scientists in clinical medicine, according to industry analysts at Thomson Reuters.

"Ken is an out-and-out genius, with intuitions and talents that continue to amaze me, even after working so closely with him for two decades," says Bert Vogelstein, co-director of the Ludwig Center with Kinzler.

Ludwig Center scientists led by Kinzler and Vogelstein currently are focused on developing better methods for detecting cancer early, when it is most curable. Their efforts have led to discoveries in detecting DNA shed from tumors in blood and other body fluids, which were made possible by the digital genomic approaches using the techniques he previously discovered.