The White House has selected two experts from Johns Hopkins for a prestigious yearlong fellowship in the federal government. 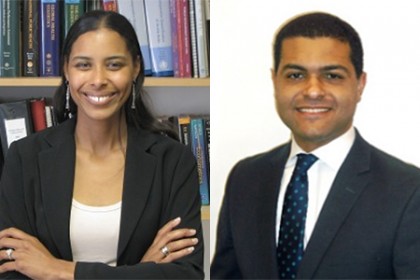 In total, 16 leaders in their fields were recently appointed as White House Fellows for the year. Among them is Sara Bleich, an associate professor in the Johns Hopkins Bloomberg School of Public Health specializing in obesity, who was placed at the U.S. Department of Agriculture; and Shereef Elnahal, a 2007 Hopkins grad now a resident at the Johns Hopkins Hospital, who's working at the U.S. Department of Veterans Affairs.

The highly selective fellowship, which was created by President Lyndon Johnson in 1964, also provides participants with education, mentorship, and travel opportunities. Johnson started the program "to draw individuals of exceptionally high promise to Washington for one year of personal involvement in the process of government," according to White House materials.

"[It's] an incredible opportunity to work with very accomplished peers and to meet with senior leaders in government and beyond," said Elnahal, who's taking a leave from his radiation oncology residency this year to participate.

After studying biophysics at Hopkins as an undergrad, Elnahal went on to earn a dual MBA and MD from Harvard University, then conducted operations consultant work with veterans affairs hospitals at Wright-Patterson Air Force Base and in Pittsburgh. Back in Baltimore, at a Hopkins pancreatic cancer clinic, he developed a new operations model that cut patient wait times in half.

In his new federal post, Elnahal hopes to apply his experience toward the agency's "organizational momentum to continue improving care for our veterans," he said via email. He also relishes the chance to connect with "15 of the most impressive people I have ever met: my co-fellows."

Among those is Bleich, an associate professor of health policy and management at the Bloomberg School who's known for her research on obesity prevention.

Bleich, a Baltimore City native who earned her PhD from Harvard, has published more than 75 papers in top medical and public health journals. At Hopkins, her recent research has included studies on food deserts and corner stores in Baltimore and a paper looking at diet soda's effect on weight loss. She recently won a $10,000 prize at the 2015 Frank Conference for her research into adolescents' beverage choices at Baltimore convenience stores.

Update: A third White House Fellow also has Johns Hopkins ties. Alexander Billioux, who earned his MD from Hopkins in 2010 and completed his residency at The Johns Hopkins Hospital, is now serving a year with the U.S. Department of Health and Human Services.

Billioux's research has focused on global health issues, including diseases of poverty in India, Guatemala, Haiti, and South Africa. In Uganda, Billioux has worked on improving tuberculosis treatment both as an Afya Bora Fellow and as an investigator for the Uganda Virus Research Institute.

During his residency at Hopkins, Billioux served as assistant chief of the Osler Medical Training Program, where he trained more than 140 internal residents while treating patients in East Baltimore. From July 2014 to July 2015 he also worked as assistant chief of service for the Thayer Firm in the Department of Medicine. White House materials also note that Billioux "led system-wide interventions" within the department, including a strategy to reduce wasteful and potentially harmful medical practices that the Society of Hospital Medicine recently adopted.