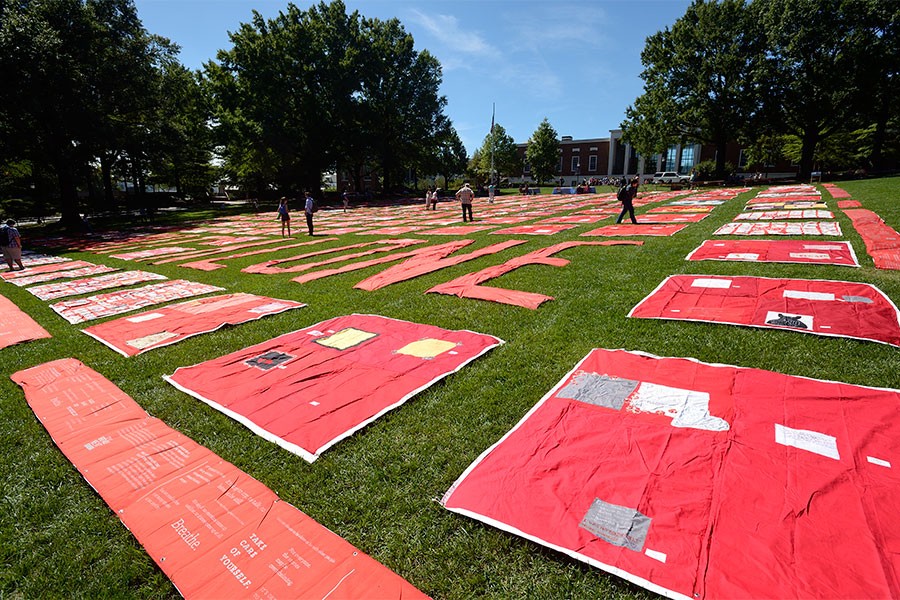 Together, the 450 stories of survivors of rape and abuse sprawled across The Beach, sharing a message to the university community—"Not Alone."

The traveling memorial of squares, pieced together to create the 100–foot Monument Quilt, stopped at Hopkins for a day-long display sponsored by the Sexual Assault Resource Unit (SARU) and Center for Health Education and Wellness (CHEW).

"Today was a remarkable thing. Survivors on our campus and people who support them came together to acknowledge that sexual assault happens and that's not our fault," said Ella Rogers-Fett, a senior history major and co-director of SARU. "We claimed physical space and brought hundreds of survivors' voices out into the open. Empowered by the stories represented in the quilt, we felt safe to give and get the support that is often missing from campus."

The quilt, a product of the anti-rape activist group Force, has made an appearance in 22 cities across the U.S. It aims to encourage a culture in which survivors are publicly supported rather than publicly shamed, says Force co-founder Hannah Brancato, who launched the project with artist Rebecca Nagle in 2010. The quilt project will culminate in a one-mile blanket of 6,000 squares at the National Mall in Washington, D.C., as a memorial to survivors.

The Monument Quilt is the latest activist work for the Baltimore-based duo, who made headlines in 2013 when they launched a viral Internet hoax, a site purporting to be a Playboy annual college party guide dedicated to issues of rape and consent. In 2012, they spoofed Victoria's Secret with a "Pink Loves Consent" line of lingerie emblazoned with sayings like "Respect" and "No Means No."

The quilt's arrival at Hopkins comes at a time when awareness about the problem of sexual assault on college campuses is on the rise and just days after the release of one of the largest studies ever conducted on college sexual violence. In the study, released by The Association of American Universities, more than 20% of female undergraduates surveyed from a number of leading universities said they were victims of sexual assault and misconduct.

At Johns Hopkins on Wednesday, students added 25 new squares of their own to the quilt. There were therapy dogs, yoga, and a dance performance at the event. There were also representatives from TurnAround, Diverse Sexuality And Gender Alliance, Hopkins Feminists, A Place To Talk, Shakti, Taiwanese American Student Association, Women's Pre Health Leadership Society, and Preventative Education and Empowerment for Peers.

"It's so surreal to have this space on campus." said junior Christine Fei, a member of SARU. "It's really bold for us to be out here like this."