As the curtains opened at the Johns Hopkins Orientation Dance Show, a group of ballerinas pranced and pirouetted across the stage. After five minutes and a round of applause, their performance came to an end. The Indian classical dance group, Shakti, took center stage for a brief period before another group shimmied around Shriver Hall in front of an audience of 800-plus people.

The annual show, designed to introduce first-year students to the dance groups and celebrate the beginning of another academic year, featured all 18 Johns Hopkins dance clubs, with performances clocking in at five minutes each. Many of the groups host workshops and tryouts in the weeks that follow.

The event featured a range of styles, from tap dancing to Bollywood Fusion.

"The concert was an excellent showcase for the amazing talent and diversity in our student dance groups," said Eric Beatty, director of Homewood Arts Programs.

The Johns Hopkins dance groups are: 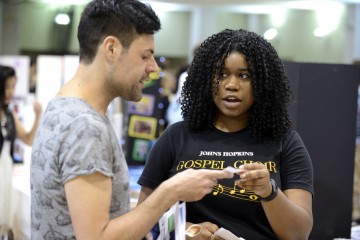