Johns Hopkins University men's lacrosse coach Dave Pietramala, who recently completed his 15th season with the Blue Jays, has been signed to a contract extension through the 2020 season, JHU Director of Athletics Tom Calder announced today 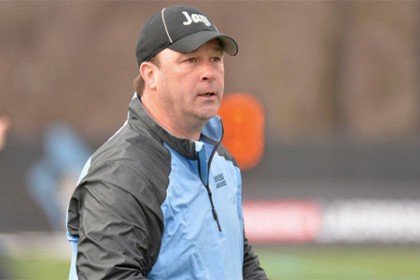 Image caption: Dave Pietramala has compiled a 169-62 record in 15 seasons at Johns Hopkins.

"The record of success of our men's lacrosse program under Dave Pietramala's guidance has been well documented, and the list of accomplishments for his team and players is as lengthy as it is impressive," Calder said. "Just as importantly, our men's lacrosse players have been excellent representatives of Johns Hopkins University in the classroom and community and have moved on to outstanding post-graduate careers in their selected fields. As I have stated many times over the last 15 years, our men's lacrosse program isn't just in good hands, it's in the right hands, and we look forward to many more years of Dave Pietramala leading our program."

Pietramala, who passed legendary coach Bob Scott on Johns Hopkins' career victories list with his first win of the 2015 season, has twice been selected as the USILA National Coach of the Year (2000, 2002) and was named Big Ten Coach of the Year in 2015.

Generally regarded as one of the finest defensive players in the history of the game, Pietramala is the only person in college lacrosse who has won both an NCAA Division I Championship as a player (1987) and as a head coach (2005, 2007). He is also the only person who has been named the national player of the year (1989) and national coach of the year (2000, 2002).

"I am deeply appreciative and humbled by the support President Ron Daniels, Director of Athletics Tom Calder, and the entire Johns Hopkins community provide to me, my staff, and our program," Pietramala said. "Additionally, I am excited to continue my relationship with our current, former, and future players—it is these individuals who make the tradition of Hopkins lacrosse so unique and special."