President Daniels likens journeys of members of Class of 2019 to that of New Horizons spacecraft, which flew past Pluto last month

Orientation activities came to a close Wednesday night as members of the Johns Hopkins University Class of 2019 received an official induction into the Blue Jay community at freshman convocation.

The new students ditched their Hopkins gear in favor of cocktail dresses and ties as JHU President Ronald J. Daniels and other university leaders welcomed the incoming class with celebratory remarks and words of wisdom.

Daniels likened the journey of the new students to that of New Horizons, the spacecraft built and operated by the Johns Hopkins Applied Physics Laboratory that recorded the first-ever close-up photos of Pluto last month.

Members of the New Horizons team, the special guests of the evening, stood as President Daniels acknowledged their presence.

"Like the New Horizons team, you—and your team of supporters—have set your sights high and fought to get this mission off the ground," Daniels told the first-year students. "Along the way, you may find yourself facing an unexpected debris field—one you could not have anticipated when you began. It may take the form of exams in Organic Chemistry or a tough critique on your first short story or facing long-time rivals on Homewood Field."

Daniels' complete remarks, as prepared for the event, are below:

Thank you, Vice Provost Phillips. And thank you to our entire Orientation team for their work in getting you here and to the Sirens, the Vocal Chords, and the Archipelago project for the soundtrack to tonight's festivities.

Welcome, to the parents, siblings, and friends who are watching from around the world.

So, I want to start my remarks tonight with a simple request: Would you mind taking out your cellphones. It's okay. We know you have been using them surreptitiously anyway—even as you hang breathlessly on the sage words of your elders.

The device you hold in your hand has about 100 times more processing power than this. [Picture of New Horizons spacecraft.]

No, that's not a vehicle from Star Wars: The Force Awakens. It's the spacecraft New Horizons that in mid-July recorded the first ever close-up pictures of Pluto. [Pictures of Pluto from various perspectives.]

And it was designed, built, and is controlled by a team of scientists and engineers at the Johns Hopkins Applied Physics Laboratory, or APL, as we know it.

But what I'd like to do tonight is put this mission in the context of…you.

When New Horizons began its historic fly-by journey in 2006, you had roamed the Earth for nine years. The iPhone launch was still a year away. Twitter had exactly zero users. And Pluto was still a planet.

Nearly a decade later, as you were making preparations to land at Hopkins—searching out future classmates on Facebook and navigating the aisles of Bed, Bath and Beyond for dorm supplies —New Horizons was making its final approach toward Pluto, navigating the outer reaches of our solar system to upend our understanding of its planets.

What you may not know is the backstory of what it took to get them.

Let's begin with the fact that the mission almost didn't happen. Funding was tight, and APL and its collaborators had to fight to get New Horizons off the ground. To do so, they assured Congress that they would deliver a spacecraft that would achieve its ambitious scientific aims—but for half the initial budgeted costs. And so Congress agreed, and APL and its partners completed the mission—and in record time.

But I am jumping the gun. There is more to the story.

Fast forward to 2011. The team is five years into the mission. With the help of the Hubble Space Telescope, the New Horizons team is already gleaning a better picture of the space around Pluto—even allowing scientists to identify new moons in Pluto's orbit.

In this case, clearer images also created a clearer understanding of the enormous risks confronting the mission. Along with uncovering those previously unknown moons, scientists feared that these moons might throw off debris into the Pluto system that could batter the spacecraft on its fly-by mission.

It turns out that when flying at 30,000 miles per hour, it only takes a particle the size of a grain of rice to knock the craft out. Something roughly this size. *[Image of rice grain projected on screen.]

I'm sure you can see it. It's right … there. Thanks to the laws of kinetic energy, that rice grain becomes the equivalent of a speeding bullet—literally.

At this point, the team had to troubleshoot.

It was as if you had to cram four years of increasingly complex physics courses, homework, and lab experiments into one weekend. It's like that—except exponentially harder and happening as your spacecraft hurtles through space.

To manage this challenge, our APL colleagues had to calculate risks and consider alternative trajectories to Pluto. They had to confront the possibility that the only way to protect the spacecraft as it flew through the debris field would be to turn the spacecraft's cameras and instruments away from Pluto. And that would mean sacrificing the epic scientific discovery they hoped for in order to preserve the chance of making any discoveries at all. Luckily, the ultimate answer to this problem set was that New Horizons had a one in 10,000 chance of being hit, so with two weeks left in the mission, the team leaders decided to stay the course.

That is, until the afternoon of July 4, 2015, when the spacecraft suddenly went silent. As Alice Bowman, the mission operations manager at APL, wryly observed: watching over this mission is like parenting a teenager. You send it out in the world well equipped and hope that it calls home once in a while (which, of course, you should consider doing every so often to your families back home).

They soon figured out that the craft was still connected but had gone into "safe mode" after its computers overloaded with too many commands. So Alice and a team that included the project manager, systems engineer, and several others spent the holiday weekend convincing the spacecraft that everything was okay and it could proceed. They succeeded in uploading the final flight plan with a week to spare before the once in a lifetime flyby. The only thing left to do was hope that New Horizons would make history.

After nine and a half years and 3 billion miles, it did.

Of course, with a spacecraft flying 3 billion miles away, it actually takes more than four hours for transmissions to travel back to Earth at the speed of light, and several hours after that for the messages to be processed. So we had to wait just a little bit longer to get the final confirmation.

But when it came … well, see for yourself. [Video on screen of _New Horizons_ connection moment and celebration.]

I had the amazing good fortune of being at APL with our collaborators and friends from NASA and the Southwest Research Institute when they celebrated the moment that New Horizons' signal reached Earth.

It was both an extraordinary and a very ordinary day for your university.

Because, you see, Hopkins is a place that refuses to be derailed by daunting problems, a place that embraces the thrill of intellectual risk-taking to solve those problems as they arise. And I believe we succeed because we are also a place where unparalleled collaboration opens avenues to new ideas and unites individual talents in a whole that is much greater than the sum of its parts.

It's just who we are.

This is true of the surgeon-scientists, physicists, engineers, and nurses who are bringing new treatments to pediatric cancer patients. It is true of our economists, sociologists, and data scientists who are addressing the entrenched social, economic, and racial inequalities that plague our cities.

It's true of Alice Bowman, Peter Bedini, Glen Fountain, Chris Hersman, and Mark Holdridge, the members of the New Horizons team who are here tonight. Would you stand? We know the Class of 2019 would like to meet you.

What we saw in them is the same spirit of imagination and intellectual daring we saw in each of you. Not simply because of your transcripts and test scores—that's one snapshot—but also because we know the extraordinary stories that lie behind your arrival at this moment.

Now, your journey from Convocation to Commencement will take a little less than half the time of New Horizons' trip to Pluto and significantly less than 3 billion miles.

But, like the New Horizons team, you—and your team of supporters—have set your sights high and fought to get this mission off the ground. Along the way, you may find yourself facing an unexpected debris field—one you could not have anticipated when you began. It may take the form of exams in Organic Chemistry or a tough critique on your first short story or facing long-time rivals on Homewood Field.

You may sail through it. You may have to navigate a different path to your destination. Or an unexpected encounter may set you on an entirely new trajectory, personally or professionally—a meeting with a patient while you are volunteering at a clinic, a poetry class you took because it fit your schedule, or perhaps a coffee with the person sitting next to you that turns into the relationship of a lifetime. We at Hopkins aim to be a full service organization—and are concerned about your romantic achievements as much as your intellectual ones.

So know that whatever your course, we know you will fit right in here.

At Hopkins, we do big things. Sometimes they happen in a moment. Sometimes it takes a little bit longer. And if we can get to this … [Pluto image on screen] with less than the power of this … [holds up cellphone], we know you hold in your hands—and minds—the power to do so much more.

By the way, I'll just assume you've been texting each other your next great idea while I've been talking.

Welcome once again to the Hopkins family. And bon voyage! 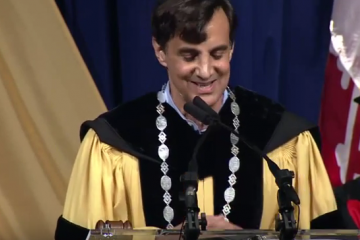 JHU Freshman Convocation for the Class of 2019