Researchers at Johns Hopkins are crediting the viral ALS Ice Bucket Challenge with helping to raise the funds needed for an important scientific step forward in our understanding of the deadly disease.

In a study described earlier this month in the journal Science, the researchers offered an explanation for the protein clumps found inside the brain or nerve cells of patients with amyotrophic lateral sclerosis, more commonly known as ALS or Lou Gehrig's disease, a progressive neuromuscular disease with no known cure.

Philip Wong, a professor of pathology at the Johns Hopkins School of Medicine and the study's lead author, told The Washington Post that the more than $220 million in donations generated globally by the Ice Bucket Challenge played a key role in making his team's work possible.

"Without it, we wouldn't have been able to come out with the studies as quickly as we did," said Wong, who is affiliated with The Robert Packard Center for ALS Research at Johns Hopkins. "The funding from the ice bucket is just a component of the whole—in part, it facilitated our effort."

The Ice Bucket Challenge, an online push to raise awareness and funding, encouraged Facebook users to film themselves pouring a bucket of ice water over their heads, then share the video in their feeds and urge others to take the challenge and/or make a donation to support ALS research. About three million people took the plunge.

Approximately 6,400 people in the U.S. are diagnosed with ALS each year, according to the ALS Association, which reintroduced the Ice Bucket Challenge this month in hopes of garnering more awareness and support. Those living with the disease typically die within two to five years after they are diagnosed.

Wong and his team have been studying ALS for about a decade, but as Jonathan Ling, another researcher at Johns Hopkins, said in an "Ask Me Anything" thread on Reddit, the millions of dollars brought into the field has given researchers the financial stability to pursue "high risk, high reward" experiments.

"The money came at a critical time when we needed it," Wong said. 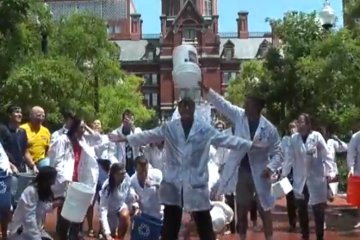