Funny business: JHU's Vali Nasr on 'The Daily Show with Jon Stewart' over the years

Jon Stewart will sign off from The Daily Show for the last time tonight, a final "Moment of Zen" wrapping up a remarkable 16-year run in which he transformed himself from a relatively unknown comedian into America's favorite fake-news anchor/political satirist.

Over that span, Stewart hosted nearly 2,700 episodes and welcomed thousands of guests, among them Vali Nasr, a Middle East scholar and dean of the Johns Hopkins School of Advanced International Studies in Washington, D.C.

Nasr appeared on The Daily Show on three occasions to talk foreign policy and about his books: In 2006, when he spoke about The Shia Revival: How Conflicts Within Islam Will Shape the Future; in 2009, to discuss Forces of Fortune: The Rise of the New Muslim Middle Class and What It Will Mean for Our World; and most recently in 2013, to talk about The Dispensable Nation: American Foreign Policy in Retreat.

"Jon Stewart will be remembered for how he used humor and wit to draw attention to news and world events, but also for his wisdom and courage in challenging common conceptions," Nasr said Thursday. "He was the moral conscience and voice of a new generation coming of age at a critical time in American politics. He will be missed." 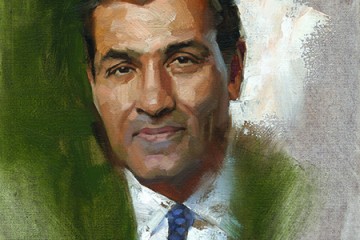