The results of common and routine blood tests are not affected by up to 40 minutes of travel on hobby-sized drones, a recent proof-of-concept study at Johns Hopkins demonstrated, promising news for the millions of people cared for in rural and economically impoverished areas that lack passable roads. 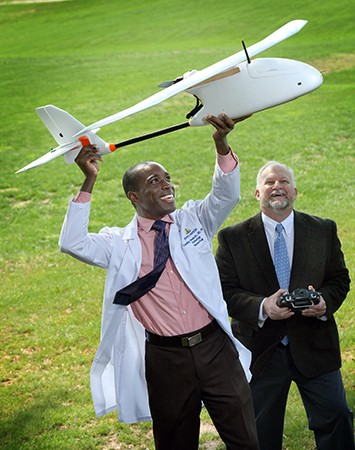 In developing nations, most tests on blood samples and other fluids are performed by dedicated laboratories that are often miles from remote clinics. By transporting samples via drones, researchers say, health care workers can gain quick access to lab tests needed for diagnoses and treatments.

"Biological samples can be very sensitive and fragile," says Timothy Kien Amukele, a pathologist at the Johns Hopkins University School of Medicine and director of a laboratory collaboration between Johns Hopkins and Uganda's Makerere University. That sensitivity makes even the pneumatic-tube systems used by many hospitals, for example, unsuitable for transporting blood for certain purposes.

Of particular concern with the use of drones, Amukele notes, is the sudden acceleration when the craft launches and the jostling when it lands on its belly.

"Such movements could have destroyed blood cells or prompted blood to coagulate, and I thought all kinds of blood tests might be affected, but our study shows they weren't, so that was cool," he says of the project, which was supported by a Johns Hopkins Discovery Award.

A report on Amukele's team's study was published today in PLOS One.

For the study, which Amukele believes is the first rigorous examination of the impact of drone transport on biological samples, his team collected a total of six blood samples from each of 56 healthy adult volunteers at Johns Hopkins Hospital. The samples were then driven to a flight site an hour away from the hospital on days when the temperature was in the 70s. There, half of the samples were packaged for flight, with a view to protecting them for the in-flight environment and preventing leakage.

Those samples were then loaded into a hand-launched fixed-wing drone and flown around for periods of six to 38 minutes. Owing to Federal Aviation Administration rules, the flights were conducted in an unpopulated area, stayed below 100 meters (328 feet), and were in the line of sight of the certified pilot.

The other half of the samples were driven back from the drone flight field to The Johns Hopkins Hospital Core Laboratory, where they underwent the 33 most common laboratory tests that together account for around 80 percent of all such tests done. A few of the tests performed were for sodium, glucose, and red blood cell count.

Comparing lab results of the flown vs. non-flown blood of each volunteer, Amukele says "the flight really had no impact."

Amukele and his team noted that one blood test—for total carbon dioxide (the so-called bicarbonate test)—did yield differing results for some of the flown vs. non-flown samples. Amukele says the team isn't sure why, but that the reason could be because the blood sat around for up to eight hours before being tested. There were no consistent differences between flown vs. non-flown blood, Amukele says, and it's unknown whether the out-of-range results were due to the time lag or because of the drone transport.

"The ideal way to test that would be to fly the blood around immediately after drawing it, but neither the FAA nor Johns Hopkins would like drones flying around the hospital," he said.

Given the successful proof-of-concept study results, Amukele says the likely next step is a pilot study in a location in Africa where health care clinics are sometimes 60 or more miles away from labs.

"A drone could go 100 kilometers in 40 minutes," says Amukele. "They're less expensive than motorcycles, are not subject to traffic delays, and the technology already exists for the drone to be programmed to 'home' to certain GPS coordinates, like a carrier pigeon."