Blue Jays will begin play in league in 2017 season 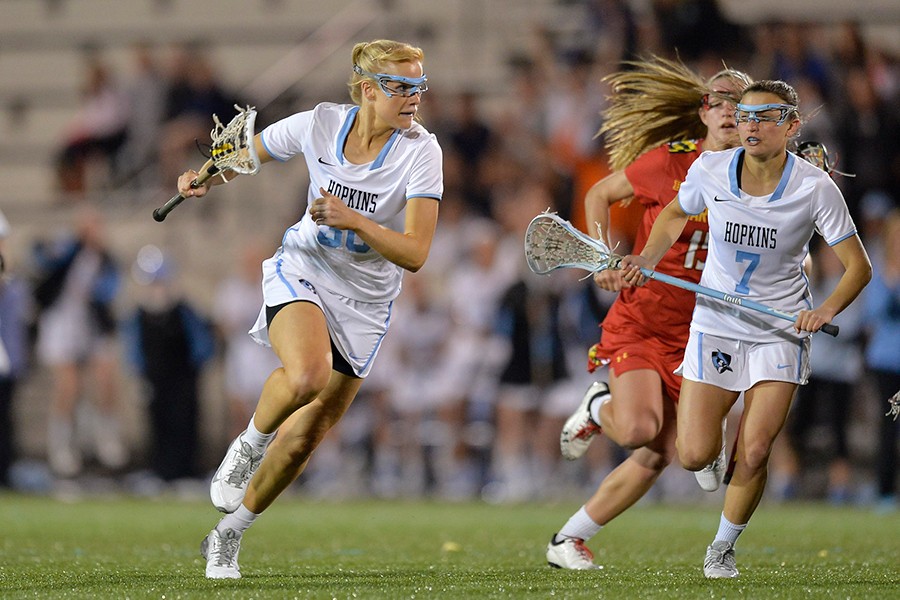 Image caption: CeCe Finney on the attack against Maryland on April 15, 2015, at Homewood Field. 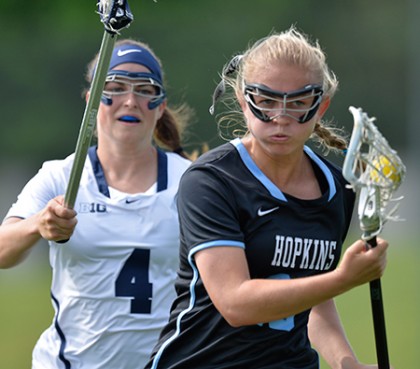 Image caption: Nevi Fernandez controls the ball for JHU in an NCAA tournament game against Penn State on April 8, 2015.

The Blue Jays have been accepted by the conference as a sport affiliate member and will join Maryland, Michigan, Northwestern, Ohio State, Penn State, and Rutgers in the league.

"For decades, Hopkins' women's lacrosse has upheld a tradition of excellence on the field and in the classroom," Daniels said. "We believe that tradition will fit seamlessly into the Big Ten and are thankful for the invitation from the conference. This is an exciting time for our student-athletes, alumni, and fans, and we look forward to the challenges and opportunities our sport affiliate membership in the Big Ten will present."

JHU recently completed its 40th season of women's lacrosse competition with a 14-4 record and a second consecutive NCAA tournament appearance.

The Blue Jays transitioned from Division III to Division I in 1999 and competed as an independent at the Division I level until 2001. In 2002, JHU joined the American Lacrosse Conference and maintained that membership through the 2014 season, after which the ALC disbanded. That league included current Big Ten members Michigan, Northwestern, Ohio State, and Penn State.

Hopkins competed as an independent in 2015 and will do so again next season before joining the Big Ten.

"We are thrilled to add the Johns Hopkins women's lacrosse program as a sport affiliate member and look forward to seven women's teams competing for the Big Ten Championship beginning in 2017," Big Ten Commissioner James E. Delany said in a conference announcement. "The Blue Jays men's lacrosse program just completed a successful first season of conference competition, part of an outstanding inaugural year of Big Ten lacrosse. We are excited to add another strong program from a premier institution with a passionate fan base to continue growing the sport of lacrosse both in the conference and on the national scene."

Blue Jays coach Janine Tucker recently completed her 22nd season at JHU and owns a career record of 249-129 (181-113 at the Division I level). She has guided Hopkins to five of its NCAA tournament and ranks 19th all-time in victories among NCAA women's lacrosse coaches.

"We are honored to join the Big Ten Conference and thrilled to be affiliated with such incredible institutions," Tucker said. "I am grateful for the tremendous support we received from our administration, including President Ron Daniels and Director of Athletics Tom Calder, during this process. Competing for a conference championship against some of the top teams in the nation is an exciting opportunity and one that should only enhance our recruiting efforts."

The Big Ten tournament champion receives an automatic bid to the 26-team NCAA tournament. The Big Ten placed four teams in the NCAAs in its inaugural season of competition— Northwestern, Ohio State, Penn State, and Maryland, which won its second consecutive national title (and 12th overall).

"The Big Ten has quickly established itself as one of the premier women's lacrosse conferences in the nation," Calder said. "We are fully committed to competing at the highest level and providing Janine Tucker and our women's lacrosse program the resources and opportunities necessary to do that. Aligning our program with the Big Ten is an exciting and positive step in our quest to compete for a national championship."