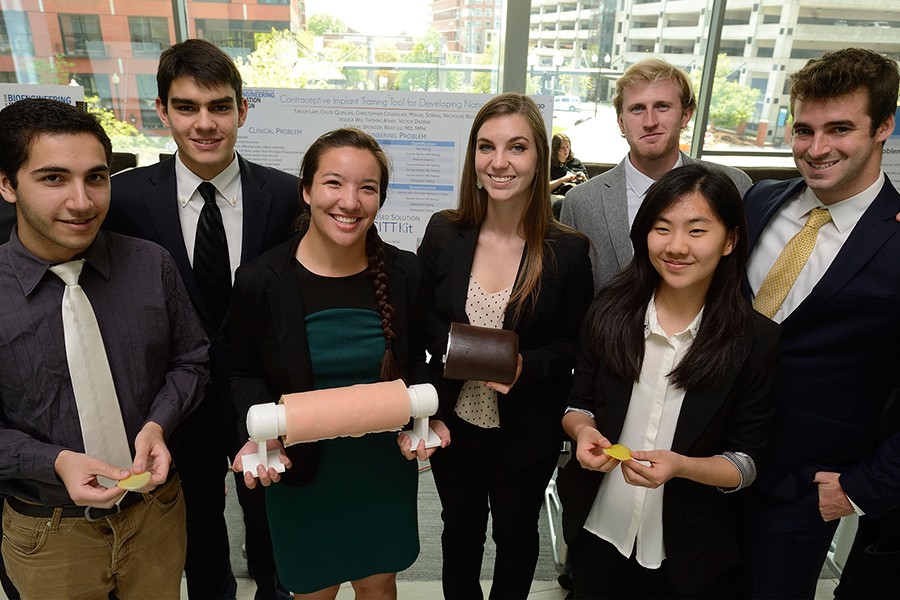 In developing regions where the economy is weak and medical services are limited, global health experts say as many as 200 million women want access to long-term, reversible contraceptives to avoid unintended pregnancies and to help space out the births of their children. 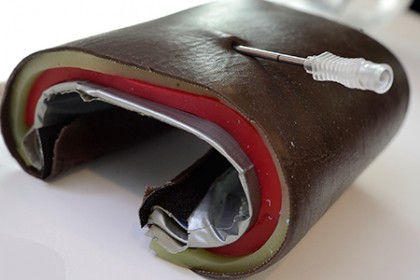 Image caption: The prototype training kit includes this practice band that features layers that mimic outer regions of the arm and could help health workers learn to properly insert and remove contraceptive implants

One of the most convenient and effective options—a tiny implant that can delay conception for three to five years—is inserted into a woman's arm and can later be removed at any time to restore fertility. However, in developing nations, these simple procedures often must be done by frontline providers who have minimal training. Sometimes, the cylindrical toothpick-shaped implant may be inadvertently inserted into the woman's fat tissue instead of just under the outer skin layer. This causes the contraceptive to become ineffective and makes removal of the implant far more difficult.

To help prevent such problems, a team of Johns Hopkins University biomedical engineering undergraduates has developed a teaching set called the Contraceptive Implant Training Tool Kit or CITT Kit, for short. The medical simulator includes two training models: a stand-alone replica arm and a layered band that can be worn by health workers who act as "patients" during practice sessions.

The student inventors say their new system better mimics anatomical textures, resulting in a more realistic representation than current training tools that use materials such as Styrofoam and latex. The Johns Hopkins students instead used silicone layers of different densities to more closely represent the physiology of skin, fat, and muscle in a human arm.

The CITT Kit's components also feature landmarks that can help the students identify the correct placement site for a cylindrical implant, which is a little less than 2 inches long. It needs to be inserted just under the outermost skin layer, about 4 inches above the elbow, where it can slowly secrete a hormone that temporarily blocks conception.

Compared to existing simulation devices, the students say their kit provides more advanced training in how to safely and easily remove an implant, a procedure that's considered to be more challenging than insertion of the contraceptive. With this kit, the students say, health workers will be able to make practice incisions through replaceable silicones layers that respond more like human skin.

"In designing these teaching tools, every choice we made was to pursue biofidelity, trying to prepare the health workers as closely as possible for the conditions they'll face when they actually perform these procedures in a clinic," said rising junior Miguel Sobral, a team member from Lisbon, Portugal.

The other team members were rising senior Christopher Coughlan; Chloé Quinlan and Nick Bello, who both graduated in May: and rising sophomores Jessica Wu, Tommy Athey and Victor Dadfar.

While working on their training kit, the student inventors were advised by physician Ricky Lu, technical director for reproductive health and family planning at Jhpiego, a nonprofit Johns Hopkins University affiliate that focuses on global health issues involving women and families.

"The student inventors came up with a novel and exciting idea of using replaceable training pods," Lu said. "These pods have placebo implants embedded to simulate a range of removal challenges, from easy pop-outs to deeply located and adherent implants requiring additional skills to extract them. This is critical to have in clinical training where removal cases for practice may be limited during a short training course."

The student inventors showcased their device recently at the annual Johns Hopkins Biomedical Engineering Design Day event, organized by the university's Center for Bioengineering Innovation and Design. The CITT Kit was developed within the yearlong undergraduate design team program, directed by Robert H. Allen, a lecturer in the Department of Biomedical Engineering, which is shared by the university's Whiting School of Engineering and its School of Medicine. Allen also is a lecturer in the School of Medicine's Department of Gynecology and Obstetrics.

Working with Johns Hopkins Technology Ventures, the students have obtained a provisional patent covering their invention. They say their invention aligns with voluntary contraception programs supported by philanthropic global health organizations such the Bill and Melinda Gates Foundation. The students say support from one of these groups could help move their prototype out of the lab and into the field-testing and eventual clinical use. 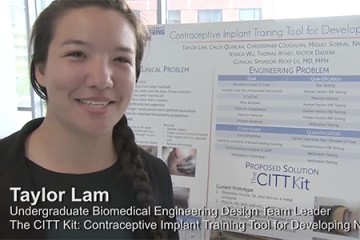