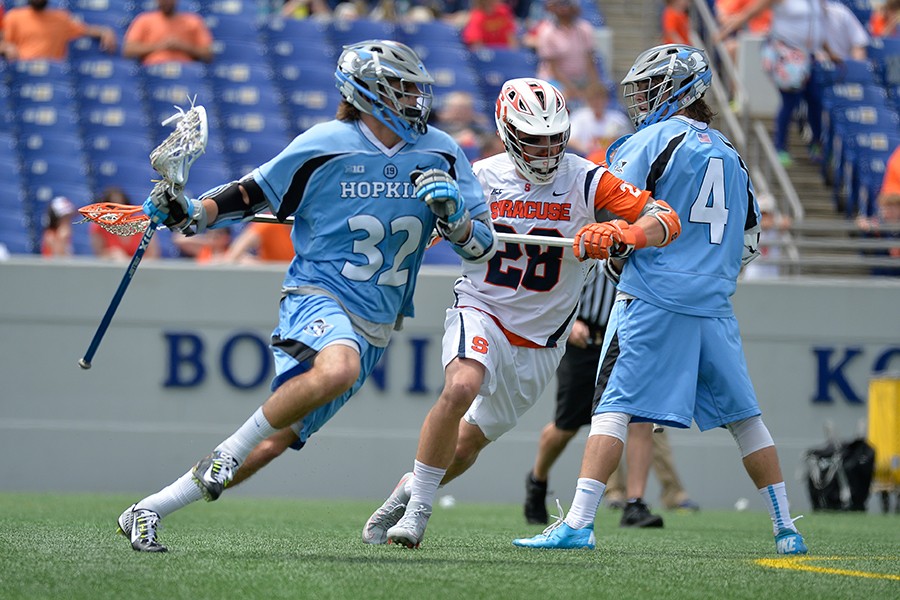 Image caption: Freshman Shack Stanwick goes to goal against a Syracuse defender in an NCAA quarterfinal game in Annapolis, Maryland, on Sunday. Stanwick scored four goals and added two assists as the Blue Jays knocked off the No. 2 seed Orange to advance to the Final Four for the 29th time.

Wells Stanwick's dramatic goal with a second left in the third quarter capped a decisive run for the Johns Hopkins men's lacrosse team, which held off a furious Syracuse rally in the closing minutes to score a 16-15 win in an NCAA tournament quarterfinal played at Navy–Marine Corps Memorial Stadium in Annapolis, Maryland, on Sunday afternoon.

The Blue Jays (11-6), winners of seven straight games and eight of their past nine, advanced to the NCAA semifinals for the first time since 2008. Hopkins will take on sixth-seeded Maryland on Saturday at 3:30 p.m. at Lincoln Financial Field in Philadelphia. Top-seeded Notre Dame and No. 4 seed Denver will face off in the other semifinal.

JHU seemingly had the game in hand when Freshman Shack Stanwick scored his fourth goal of the game to give the Blue Jays a 15-10 lead with just under four minutes remaining. But the Orange (13-3)—the tournament's No. 2 seeded despite finishing the season as the No. 1-ranked team in the nation—scored a pair of goals to close within 15-12. Then, after an empty net goal by JHU's Ryan Brown, scored three more times in a span of 1:23 to close within one with 23 seconds to play. Syracuse had won 11 of 12 fourth-quarter faceoffs to that point, but Hopkins freshman Hunter Moreland won a critical faceoff and time expired before the Orange could muster a final shot.

Wells and Shak Stanwick each had four goals and two assists for the Blue Jays, who erased a 7-6 halftime deficit by outscoring Syracuse 5-1 in the third period. That burst was capped by a remarkable individual effort by Wells Stanwick, who took the ball on a restart with four second remaining, eluded his defended, then dove past the crease and beat Syracuse goalkeeper Bobby Wardell with a high shot with just a tick remaining on the clock. 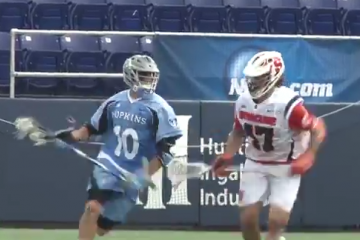