Update: Jessye Norman will not be able to speak at Peabody's commencement "due to personal, unforeseen circumstances," Peabody Dean Fred Bronstein announced in a message to students, faculty, and staff on Friday, May 15. U.S. Rep. Elijah Cummings will speak in her place. Norman will be awarded the Peabody Medal in absentia. 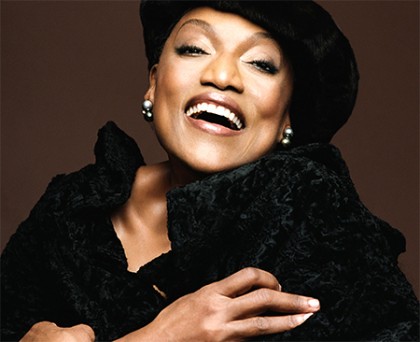 Soprano Jessye Norman, one of the most accomplished artists of the century, will be the 2015 recipient of the George Peabody Medal for Outstanding Contributions to Music in America. The medal will be presented on May 21 at the Peabody Conservatory's graduation ceremony, where she will be the commencement speaker.

"Jessye Norman's life and astonishing career are defined by her individual artistry and an unflagging belief in the power of music to open minds and elevate lives," said Fred Bronstein, dean of the Peabody Institute of the Johns Hopkins University. "As our graduating students begin careers in a world characterized by constantly shifting landscapes for music and musicians, where better to look for inspiration than an artist whose gifts have been not only musical, but humanistic and holistic as well?"

Since her 1969 operatic debut as Elisabeth in Tannhäuser at the Deutsche Oper Berlin, Norman has crafted a career of extraordinary depth and variety, singing recitals, concerts, and operas to critical acclaim worldwide. The New York Times said of her, "This is an amazing voice, a catalogue of all that is virtuous in singing."

Among her noteworthy achievements, Norman mounted the first performances of Sacred Ellington at the Barbican Center in London, performed a unique double-bill of Schoenberg's Erwartung and Poulenc's La Voix Humaine in Paris, and curated and directed Carnegie Hall's three-week-long HONOR! Festival, a celebration of the African American Cultural Legacy. As soloist for the Congressional Commemoration of the 50th Anniversary of the March On Washington, she performed "He's Got the Whole World in His Hands" in Statuary Hall of the United States Capitol Building.

The awards Jessye Norman has received include the Kennedy Center Honor and the National Medal of Arts; Austria's Medal of Arts and Letters, first class; New York City's highest honor in the performing arts, the Handel Medallion; and the NAACP's the Spingarn Medal. Recordings from her catalogue of more than 75 have been awarded France's Grand Prix National du Disque, London's Gramophone Award, Amsterdam's Edison Prize, recording honors in Belgium, Spain, and Germany, and several Grammy Awards. In 2006, Norman was presented a Grammy Award for Lifetime Achievement.

The Jessye Norman School of the Arts opened in 2003, offering tuition-free arts training to talented middle school students in Norman's hometown of Augusta, Georgia. She serves on numerous non-profit boards and is a lifetime member of the Girl Scouts of America. Her memoir, Stand Up Straight and Sing!, was published in 2014.