Alex Gorsky, chairman of the Board of Directors and chief executive officer of Johnson & Johnson, and Brian Rogers, chairman and chief investment officer of the T. Rowe Price Group, have been named speakers at two upcoming commencement ceremonies for the Johns Hopkins Carey Business School. 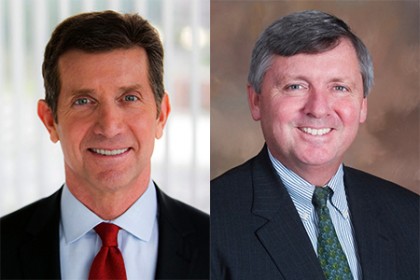 "Graduation day is the ultimate day for our students. It is a celebration of their hard work and preparation," said Bernard T. Ferrari, dean of the Carey Business School. "Alex Gorsky is an accomplished leader who heads one of the largest consumer health, pharmaceutical, and medical device companies, and Brian Rogers is a respected leader in the investment industry. We are proud to welcome them as our graduation speakers."

Gorsky became chief executive officer of Johnson & Johnson in April 2012. After graduating from West Point, he spent six years as an officer in the United States Army and joined Johnson & Johnson immediately upon his retirement from the service. He was awarded a Master of Business Administration degree from the University of Pennsylvania's Wharton School of Business in 1996.

Rogers has worked for the T. Rowe Price Group since 1982 and has more than 33 years of investment experience. T. Rowe Price is a global investment management organization with more than $746 billion in assets under management. The organization provides a broad array of mutual funds, sub-advisory services, and separate account management for individual and institutional investors, retirement plans, and financial intermediaries. Rogers has announced that he plans to step down in October 2015 as manager of the $30 billion T. Rowe Price Equity Income Fund.