Levi Watkins Jr., a pioneer in both cardiac surgery and civil rights who implanted the first automatic heart defibrillator in a patient and was instrumental in recruiting minority students to the Johns Hopkins University School of Medicine, died Saturday of complications from a stroke. He was 70. 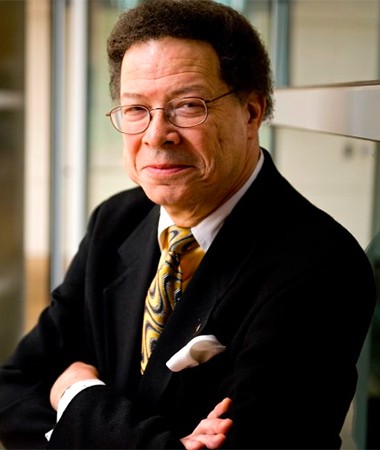 Watkins came to Johns Hopkins in 1970 as a general surgery intern and retired in 2013 after serving as an exemplary surgeon and inspirational leader for 43 years.

"He remained as powerful a presence and as important an influence on Johns Hopkins as he was when he arrived here," Paul B. Rothman, dean of the medical faculty, and Ronald R. Peterson, president of The Johns Hopkins Hospital and Health System, wrote in a message to the Hopkins community. "Johns Hopkins was a great institution then—but it is a far, far better place now: more diverse, more innovative, more connected to the community that surrounds us, more welcoming. We have Levi Watkins to thank for a lot of those changes."

Watkins was born in Parsons, Kansas, and moved with his family to Alabama, where he attended the Dexter Avenue Baptist Church led by Dr. Martin Luther King Jr. He played an active role in the Montgomery bus boycotts in the 1950s and became the first African-American admitted to Vanderbilt University's School of Medicine in 1966.

After earning his medical degree from Vanderbilt in 1970, he began a surgical internship at Johns Hopkins University School of Medicine and, after a research stint at Harvard Medical School, became Johns Hopkins Hospital's first black chief resident in cardiac surgery.

From his earliest days at Hopkins, he played a pivotal part in changing the institution's role in medical education. In 1975, at the request of the newly appointed School of Medicine dean, Richard Ross, Watkins and a fellow African-American faculty colleague, ophthalmologist Earl Kidwell, a 1973 School of Medicine graduate, launched a concerted nationwide drive to recruit talented minority students who were interested in studying medicine. Within a few years, Johns Hopkins was attracting black students from all over the nation who were convinced by Watkins that Johns Hopkins wanted them. The success of the Johns Hopkins minority recruitment campaign soon made it a model imitated by other medical schools.

In 1980, Watkins gained renown for implanting the first automatic heart defibrillator in a patient suffering from repeated, life-threating episodes of ventricular fibrillation, or irregular heartbeats. Such a procedure now is commonplace, saving untold lives annually.

In 1983, he was appointed to the medical school's admissions board, and the recruitment, retention, and graduation rates for minorities steadily climbed. Each year, Watkins hosted a reception for black students, house staff, and faculty, which grew from 10 or so attendees in the 1970s to more than 100 by the mid-1990s.

"That progress continues today, with underrepresented minority enrollment in the School of Medicine on the rise," Rothman and Peterson wrote. "It is one of Levi Watkins' most vital legacies."

In 1991, Watkins was promoted to full professor of cardiac surgery and vice dean for postdoctoral programs and faculty development. He would have an immense impact on postdoctoral education in the country by establishing the nation's first postdoctoral association at Johns Hopkins, another pioneering effort that has been emulated elsewhere.

At this year's commemoration event, an official oil portrait of Watkins was unveiled. He died just a week after the portrait was formally installed in the Division of Cardiac Surgery.

In 2013, the American Heart Association established the Watkins-Saunders Award, recognizing excellence in medical and community work focused on diminishing health care disparities in Maryland and named in honor of Watkins and University of Maryland cardiologist Elijah Saunders, who died on April 6 of cancer at the age of 80. Lisa Cooper, director of the Johns Hopkins Center to Eliminate Cardiovascular Health Disparities and a MacArthur Foundation "Genius Grant" recipient who is among the many leading physicians whom Watkins mentored, was the first recipient of the award.

"It is inarguable that Levi Watkins' impact on our hospital and School of Medicine—on their culture, on their care—will endure," Rothman and Peterson wrote, "just as will our immense admiration for him and thanks for all that he did here."