At 5 p.m. today, Levering Hall on the Homewood campus will turn into a geek paradise: Pokemon and Magic the Gathering tournaments, a rotation of anime movies in the Arellano Theater, laser-tag sessions on the quad, and 48 consecutive hours of board games in the Great Hall. 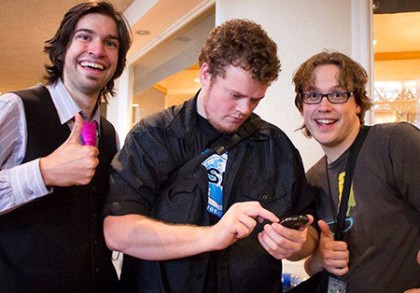 It's all on the schedule for JohnCon, Johns Hopkins' annual two-day sci-fi, fantasy, and gaming convention.

"People come and go all weekend," says JohnCon vice president Emily Forster, a junior majoring in molecular and cellular biology. "Some people drop by for 10 minutes, some stay for hours."

The convention's geared toward both hardcore sci-fi/fantasy fans and gamers, and those with more casual interests, Forster says. Undergrads, grad students, faculty members, and off-campus visitors are all welcome, with a $10 donation suggested but not required.

Round-the-clock activities are planned, including a panel on the ins and outs of writing fan fiction, a Super Smash Bros. Melee tournament, an 18+ talk on Japanese fetishes, a Legend of Korra role-playing game, a Dungeons & Dragons Eberron session, and showings of anime movies, including The Girl Who Leapt Through Time (2006).

The nature of the event—48 hours without interruption—means ebbs and flows of activity, Forster says. In the early morning hours, things can get quiet, though people "do hang out and stay up all weekend" playing board games and video games, she says. A rave, scheduled to start 1 a.m. Saturday, will surely be less quiet.

In terms of entertainers, this year's headliner is the +2 Comedy troupe, a favorite of conventions across the U.S. This is the second JohnCon for the New Jersey-based group, which specializes in "nerd comedy." In addition to a Saturday evening show, they'll present a panel on "Dirty Video Games Lies" on Friday night, exploring misunderstandings about video games. And on Sunday they'll record a podcast.

Another visitor will be sci-fi/fantasy author and composer Danny Birt, who will read from his books and perform music.

JohnCon is organized by a small board affiliated with three clubs at Hopkins—the Science Fiction and Fantasy Association, the Pen and Paper Gaming Club, and the Anime Club.

Loosely connected groups include the Smash@JHU club (for aficionados of the Super Smash Bros. Nintendo game) and the Advanced Computer Machinery Association.

Combined, these specialty-interest clubs represent "hundreds of students" and host various tournaments and other social events throughout the year, Forster says.

The annual springtime JohnCon event has been going on since the 1990s, according to Forster. She says the time of year makes it a nice chance "to blow off steam before finals and hang out with each other before we part ways" for the summer.