Anthropologist Niloofar Haeri and Lawrence M. Principe, a historian of science and a chemist, both of Johns Hopkins University, were among 175 prominent scholars to win 2015 fellowships from The John Simon Guggenheim Memorial Foundation. 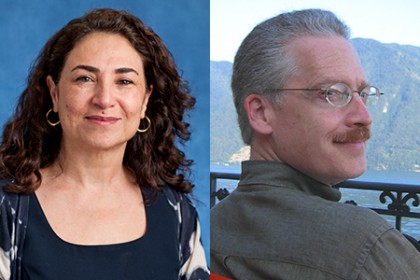 The Guggenheim foundation selected Haeri and Principe from an applicant pool of nearly 3,000 scholars, artists, and scientists.

Both professors work in the Krieger School of Arts and Sciences. Principe is the Drew Professor of the Humanities, splitting his time between the Department of the History of Science and Technology and Department of Chemistry. He is also director of the Singleton Center for the Study of Premodern Europe. Haeri is a professor and chairwoman of the Department of Anthropology.

The Guggenheim foundation offers fellowships to scholars and artists to help them to engage in research "in any field of knowledge and creation in any of the arts, under the freest possible conditions and irrespective of race, color, or creed." The fellowships are intended for those who have demonstrated "exceptional capacity for productive scholarship or exceptional creative ability in the arts."

The fellowships are for a minimum of six months and a maximum of 12 months, and are intended to provide blocks of time to work with creative freedom. The amounts of grants vary. Haeri intends to use her fellowship to work on her book, In the Presence of the Divine: Prayer and Poetry in the Lives of Iranian Women.

Principe said his fellowship will give him the quiet time and ability to travel he needs to help him finish a book on the transformations of chemistry at the French Academy of Sciences at the start of the 18th century.

The fellowships were established in 1925 by former U.S. Senator Simon Guggenheim and his wife, in memory of their 17-year-old son, John Simon Guggenheim, who died in 1922.