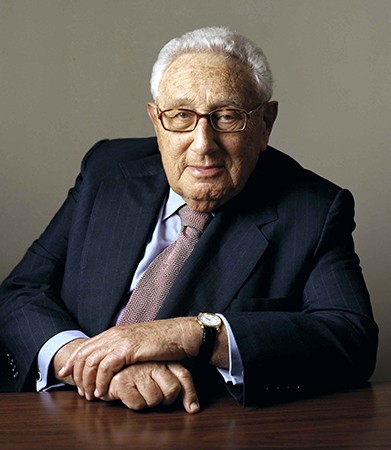 The new Henry A. Kissinger Center for Global Affairs will be located at the university's Paul H. Nitze School of Advanced International Studies in Washington, D.C. It will specialize in long-term strategic analysis and in the disciplined application of historical lessons to contemporary international problems.

"There is a need for an approach in international relations education that transcends the narrow confines of short-run policymaking," Johns Hopkins President Ronald J. Daniels said. "The Kissinger Center is created to address that need. The rigorous theoretical research at the center will instill a deep sense of intellectual inquiry in the minds of all those who engage with the subjects at hand, including the most vexing international issues of our time."

"I am deeply moved that so many friends have come together at Mike Bloomberg's initiative to support an center that will advance the country's contribution to wresting order from incipient chaos," Kissinger said. "The challenges of today's world demand fresh thinking and new ideas based on historical perception, knowledge, and sound analysis. The School of Advanced International Studies at Johns Hopkins is uniquely positioned to tackle such challenges with a combination of contextual studies in economics, religion, and regional and cultural history with practical diplomacy."

Kissinger served as national security adviser and secretary of state in the Nixon and Ford administrations. He negotiated nuclear weapons and anti-ballistic missile treaties with the Soviet Union and laid the groundwork for President Richard Nixon's breakthrough visit to China in 1972. He negotiated for the United States at the Paris peace talks that led to the end of the Vietnam War.

Vali Nasr, the dean of the School of Advanced International Studies, said he is particularly pleased that a valuable new scholarly center at SAIS will honor the former secretary of state.

"The Kissinger Center is a timely investment in furthering the study of international relations during a period in which the global order faces both new opportunities and complex challenges," Nasr said.

"The center," Nasr said, "will be dedicated through the individual and collective thought leadership, scholarship, and pedagogy of its faculty to shaping the way our future leaders will develop and implement foreign policy."

A former Harvard University professor of government, Kissinger has remained an influential observer of international affairs. He is the author of 18 books and is founder and chairman of Kissinger Associates Inc., an international consulting firm.

Kissinger has been awarded the Nobel Peace Prize, the Presidential Medal of Freedom, and the Medal of Liberty.

Gifts supporting the creation of the center are part of Rising to the Challenge: The Campaign for Johns Hopkins, an effort to raise $4.5 billion, primarily to support students, research and discovery, and interdisciplinary solutions to some of humanity's most important problems. The campaign, supporting both the university and Johns Hopkins Medicine, began its quiet phase in January 2010, was publicly launched in May 2013, and is targeted for completion in 2017. More than $2.95 billion has been committed so far.