The postdoctoral period can be a strange gray zone. "You're in an interesting position, in terms of life and career," says Anindya Roy, president of the Homewood Postdoctoral Association at Johns Hopkins University. "You're not really a student anymore, but you also don't have a permanent job." Adding to the uncertainty is the changing career landscape for postdocs, which now more than ever is stretching beyond traditional academic roles.

One of the goals of this year's Johns Hopkins Postdoc Retreat, a daylong event in East Baltimore on April 7, is to give postdocs a look at a greater diversity of potential career trajectories.

After such long-term immersion in an academic setting, "sometimes postdoc students get trapped into thinking [it's] the only option," Roy says. That mindset is not particularly helpful, given the intense competition for scarce faculty jobs—and also the rising demand for doctorates in nonacademic sectors, like industry, government, and policy.

"A lot of PhDs come in assuming they're going into faculty positions, but they don't," adds Corrine Pettigrew, president of the postdoc association for East Baltimore and Bayview. Even within academia, Roy says, "there are more nuances" than expected to the types of positions available.

So, while the upcoming retreat will explore traditional academic paths— i.e., a workshop on preparing an application package—it will also present a panel of PhDs at work in other fields. Those panelists include staffers of Booz Allen Hamilton, the American Physical Society, and the Food and Drug Administration.

The two postdoc associations are organizing the event, the second annual postdoc retreat at Hopkins; the inaugural retreat was held in May 2014 at the Homewood campus. The two groups collaborate often, both for social purposes and professional development opportunities. Together they represent roughly 1,250 postdocs across the Hopkins campuses (about 250 of those within the smaller Homewood association).

The retreat, held in the Turner Concourse meeting space in East Baltimore, will include workshops, breakout sessions, and networking, along with presentations from eight selected postdocs, who are eligible for awards.

The postdocs will also hear from two speakers: Dan Beaudry, author of Power Ties: The International Student's Guide to Finding a Job in the United States, and Gerald Klickstein, director of the Peabody Conservatory's Music Entrepreneurship and Career Center.

Registration for the free event closes on March 31. All postdoctoral fellows across JHU's campuses and institutes are welcome to attend the retreat, which runs from 8 a.m. to 6 p.m. on April 7 and closes with remarks from Johns Hopkins University President Ronald J. Daniels. 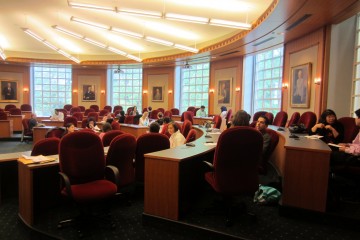 'Let Me Tell You'

Published May 30, 2014
Fellows from Engineering, Arts and Sciences, Medicine gathered May 16 at Homewood