Art historian Daniel Weiss, who served as dean of Krieger School from 2002 to 2005, is now president of Haverford College

The Metropolitan Museum of Art announced last week that Daniel H. Weiss, a one-time Johns Hopkins University faculty member and current president of Haverford College in Pennsylvania, will succeed Emily K. Rafferty as the museum's chief operating officer and president. Rafferty is stepping down this month after 10 years in the post. 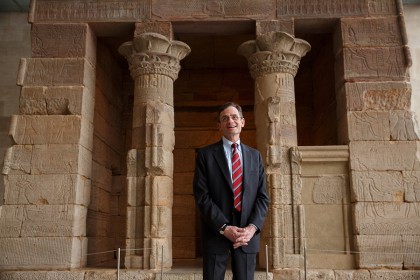 Weiss, 57, is a former professor of art history and dean of the Krieger School of Arts and Sciences at Johns Hopkins, where he earned an MA and PhD in the History of Art. From 2005 to 2013, Weiss served as president of Lafayette College in Easton, Pennsylvania.

In an interview with The New York Times last week, Weiss said that the job offer "really came out of the blue." And though he spent decades in academia, "it became clear to me that this was a once-in-a-lifetime opportunity."

This is Weiss' first job in a museum leadership position, though his museum career began as a shops manager at John F. Kennedy Center for the Performing Arts in Washington, D.C. As one of the leaders of the nation's largest art museum, he will be responsible for daily operations and oversee a staff of more than 1,500.

Mr. Weiss said he viewed the Met—which has emerged from some rocky years during the recession and is now on a solid footing with its endowment—as an institution whose main challenge was to attract an even broader and more diverse audience. It needs "to be welcoming to everyone who has an interest in art," he said, "not just scholars."