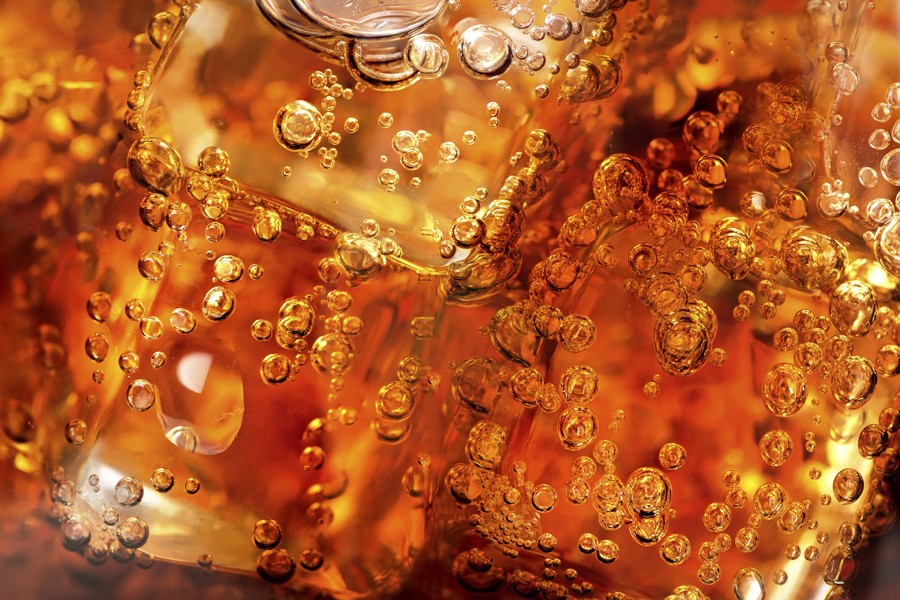 Public health researchers looking at U.S. soda drinking habits warn that many people may be regularly exposing themselves to a potentially cancer-causing byproduct of the caramel coloring used in some types of soda.

Caramel color is a common ingredient in colas and other dark soft drinks, and a possible human carcinogen—4-methylimidazole (4-MEI)—is formed during the manufacture of some kinds of the coloring. Analysis of soda consumption data show that between 44 and 58 percent of people over the age of 6 typically have at least one can of soda per day.

Building on an analysis of 4-MEI concentrations in 12 different soft drinks first published by Consumer Reports in 2014, researchers led by a team at the Johns Hopkins Center for a Livable Future estimated exposure to 4-MEI from caramel-colored soft drinks and modeled the potential cancer burden related to routine soft drink consumption levels in the U.S.

The results of their research were published online Wednesday in PLOS One.

"Soft drink consumers are being exposed to an avoidable and unnecessary cancer risk from an ingredient that is being added to these beverages simply for aesthetic purposes," says Keeve Nachman, senior author of the study, director of the Food Production and Public Health Program at the center, and an assistant professor at the Johns Hopkins Bloomberg School of Public Health. "This unnecessary exposure poses a threat to public health and raises questions about the continued use of caramel coloring in soda."

While there's currently no federal limit for 4-MEI in food or beverages, Consumer Reports petitioned the Food and Drug Administration to set limits for the potential carcinogen last year. It also shared the findings with the California attorney general's office, which enforces the state's Proposition 65 law aimed at reducing consumers' exposure to toxic chemicals. Under this state law, any food or beverage sold in the state that exposes consumers to more than 29 micrograms of 4-MEI per day requires a health-warning label.

In 2013 and early 2014, Consumer Reports partnered with the Center for a Livable Future to analyze 4-MEI concentrations of 110 soft drink samples purchased from retail stores in California and the New York metropolitan area. The analysis found by far the highest concentration in Malta Goya, a non-alcoholic malt beverage that is popular in Caribbean nations. Samples of Pepsi One, Diet Pepsi, and Pepsi also scored above the 29 microgram per can/bottle level in some instances. Coke, Diet Coke, Coke Zero, and Dr. Pepper scored well below the 29 microgram threshold in two tests; Sprite was shown to contain no significant levels of 4-MEI.

The more recent study pairs those results with population beverage consumption data from the National Health and Nutrition Examination Survey in order to estimate the population risks and cancer burden associated with 4-MEI exposures through soda. While the 2014 study of the 110 samples of soda brands was not large enough to recommend one brand over another or draw conclusions about specific brands, results indicated that levels of 4-MEI could vary substantially across samples, even for the same type of beverage. "For example, for diet colas, certain samples had higher or more variable levels of the compound, while other samples had very low concentrations," says Tyler Smith, lead author of the study and a program officer with the Center for a Livable Future.

"This new analysis underscores our belief that people consume significant amounts of soda that unnecessarily elevate their risk of cancer over the course of a lifetime," says Urvashi Rangan, executive director for Consumer Reports' Food Safety and Sustainability Center. "We believe beverage makers and the government should take the steps needed to protect public health. California has already taken an important step by setting a threshold for prompting Prop 65 labeling based on daily 4-MEI exposure from a food or beverage, such as a soda. This study sought to answer a critical question: How much soda do American consumers drink on average?"