For more than a decade, a vial of rare snake venom refused to give up its secret formula for lethality; its toxins had no effect on the proteins that most venoms target. 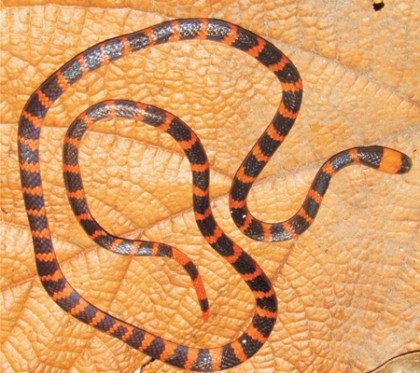 It comes from a reclusive redtail coral snake, or Micrurus mipartitus, which is primarily found in Costa Rica and parts of South America.

But recently, an international team of researchers figured out the venom's recipe—a toxin that permanently activates a crucial type of nerve cell protein, causing deadly seizures in prey. The details were published online in the Proceedings of the National Academy of Sciences on Monday.

"What we found are the first known animal toxins—and by far the most potent compounds—to target GABA(A) receptors," says Frank Bosmans, assistant professor of physiology and neuroscience at the Johns Hopkins University School of Medicine. "Once they bind to the receptors, they don't let go."

Most toxins in snake venoms target specialized receptors—nicotinic acetylcholine receptors—on the surface of nerve cells that make muscles contract, paralyzing the snakes' victims. But biochemical studies showed the active ingredient in the redtail coral snake's venom to be twin proteins, dubbed micrurotoxins (MmTX) after their serpentine source. But when the researchers tested MmTX on lab-grown cells saturated with nicotinic acetylcholine receptors, nothing happened. This puzzled researchers because MmTX was known to cause a repeating pattern of relaxation and seizures, similar to what's seen in epilepsy, in mice.

By tagging the protein with a radioactive label, the team at Aix Marseille University in France determined that protein attached itself to GABA(A) receptors, pores on nerve cells in the brain and spinal cord. GABA(A) receptors respond to the molecule GABA by opening to let negatively charged chloride ions flow into a nerve cell that has just fired. Doing so resets the cell's equilibrium so that it can fire another signal when needed.

Further testing showed that MmTX binds to GABA(A) receptors more tightly than any other compound known—100 times tighter than the plant-derived compound PTX, for example. MmTX also binds to a unique site on the GABA(A) receptor protein, changing the receptor's shape and making it far too sensitive to GABA molecules. As a result, the receptor's pore opens permanently and the nerve cell is never able to reset, causing it to misfire and resulting in potentially fatal convulsions in the snake's prey.

Anti-anxiety medications like diazepam and alprazolam also bind to GABA(A) receptors, Bosman notes, but they cause relaxation instead of seizures because they bind much more loosely. His team plans to use MmTX to gain insight about how GABA(A) receptors work. Since errors in the receptors can cause epilepsy, schizophrenia, and chronic pain, the team hopes that their future work will be able to shed light on these and other disorders.