She is among 10 collegiate women's basketball players chosen for honor 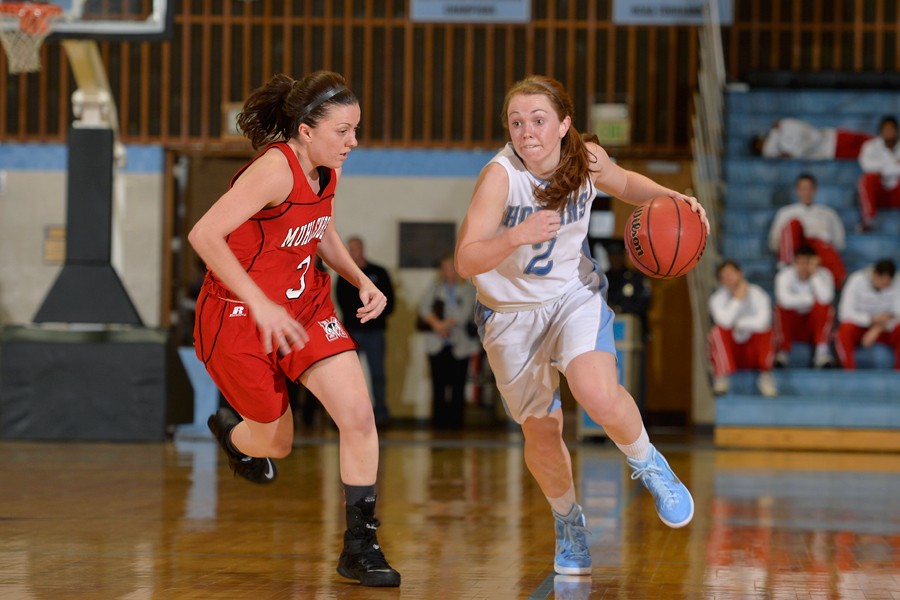 Johns Hopkins junior Katie Clark is one of 10 basketball players from across the nation to be selected to the 2015 Allstate Women's Basketball Coaches Association Good Works Team, which was announced Tuesday morning. Clark is one of two underclassmen to receive the honor, which recognizes a distinguished group of student-athletes who have demonstrated a commitment to enriching the lives of others and contributing to the greater good in their communities.

The team consists of five student-athletes from NCAA Division I and five from NCAA Divisions II, III, and the NAIA. Nominations were submitted by sports information directors and coaches at colleges and universities across the country, and a record total of 93 nominees from the WBCA were announced in early December. A panel of former coaches, media members, and players completed voting for the final team.

Clark is majoring in public health and carries a 3.83 cumulative grade point average. Most recently, she was named a CoSIDA/Capital One Academic All-District selection for the second time in her career. The Hopkins floor general is averaging 9.3 points and 4.2 rebounds in 26.4 minutes per game this season, and she also leads the team in assists with 58. She is one of just two players on the team to start and play in every game this season for the Blue Jays (14-7).

Clark has established herself as a leader on the court, in the classroom, and in the community at Johns Hopkins. She is president of the Student Athlete Advisory Committee, where she coordinates a mentoring program for local middle school students; social chair of the Women's Pre-Health Leadership Society, where she actively mentors young girls and encourages them to pursue careers in the sciences; a volunteer at the Kennedy Krieger Institute's Gait Improvement Group, which helps kids with developmental disorders and injuries through physical therapy to improve movement and coordination; and a board member with the Fellowship of Christian Athletes, where her service activities have included a civic works restoration project and feeding the homeless.

"Community service and giving back are an integral part of Allstate's core values, and recognizing the WBCA Good Works Team for their commitment in this area is one of the efforts we are most proud of," said Pam Hollander, vice president of marketing for Allstate Insurance Company and a member of the 2015 WBCA Good Works Teams selection panels. "In our third year partnering with the WBCA and NABC, we could not be more honored to have a role in recognizing truly deserving young athletes who encourage all of us to make a positive impact on those around us."

Members of the Allstate WBCA Good Works Team will be invited to the 2015 WBCA Convention and 2015 NCAA Women's Final Four in Tampa, Florida, where they will participate in a community project benefitting the host city.