Junior Ryan Brown scored seven goals—one short of his career high—and freshman Shack Stanwick added three scores in his collegiate debut as the Johns Hopkins men's lacrosse team cruised to a 16-4 victory against UMBC in its season-opener on Saturday afternoon at Homewood Field. 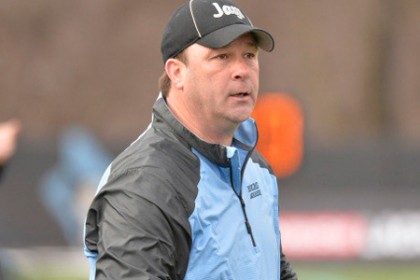 The victory gave Blue Jays coach Dave Pietramala 159 wins in his career, making him the winningest coach in school history. He passed Bob Scott, who won 158 games as JHU's coach from 1955-74. Pietramala, now 159-55 in his 15th season at Johns Hopkins, was honored in a brief post-game ceremony, during which he was joined by Scott on the field.

Johns Hopkins (1-0), ranked No. 5 nationally, raced to a 6-0 lead after one quarter and never looked back. Junior Connor Reed opened the scoring, and Brown and Stanwick each scored twice in the opening period. Wilkins Dismuke, Joel Tinney, Michael Pellegrino, Cody Radziewicz, and Patrick Fraser all scored a goal apiece for the Blue Jays, and Wells Stanwick had three assists.

Johns Hopkins was playing its first game since freshman Jeremy Huber passed away suddenly in his campus dorm room on Jan. 26. The Blue Jays wore Huber's No. 19 on their jerseys and helmets, and his number is painted on the field in front of the team bench.