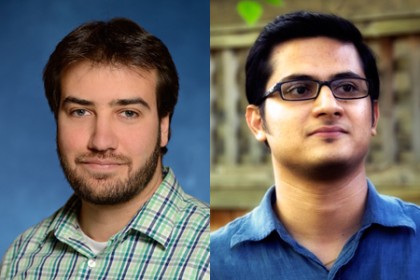 "The CAREER award is one of the NSF's most competitive awards and emphasizes high-quality research and novel education initiatives," Whiting School Dean Ed Schlesinger wrote in message congratulating the two winners. "It provides funding so that young investigators have the opportunity to focus more intently on furthering their research careers."

El-Awady's research focuses on predicting the underlying deformation, damage, and failure mechanisms in materials, meaning how they change shape and form, and ultimately fail because of the application of a force or forces. As founder of JHU's Computational and Experimental Materials Engineering Laboratory, El-Awady's goal is to enhance the field of "materials by design."

His aim is to move from empirical, trial-and-error development techniques to a combination of state-of-the-art multi-scale computational methods and experimental techniques that streamline the process of developing reliable materials with superior performance.

El-Awady earned his bachelor's and master's degree at Cairo University. In 2008, he received a PhD in Aerospace Engineering from UCLA, and he joined the faculty at Johns Hopkins in In September 2010.

The other CAREER award recipient, Basu, will use his funding to support his efforts to break new ground in the fundamentals of discrete optimization, a mathematical strategy used to help solve large-scale decision-making problems. In particular, he seeks to apply these methods to problems where a combination of discrete choices and non-discrete choices have to be made to optimize a given objective, such as minimizing costs or maximizing profits.

Basu completed his undergraduate studies at the Indian Institute of Technology in Delhi, India, and then earned a master's degree in Computer Science from Stony Brook University in New York. He received his PhD through the Algorithms, Combinatorics and Optimization Program at Carnegie Mellon University, and he joined the faculty at Johns Hopkins in July 2013.