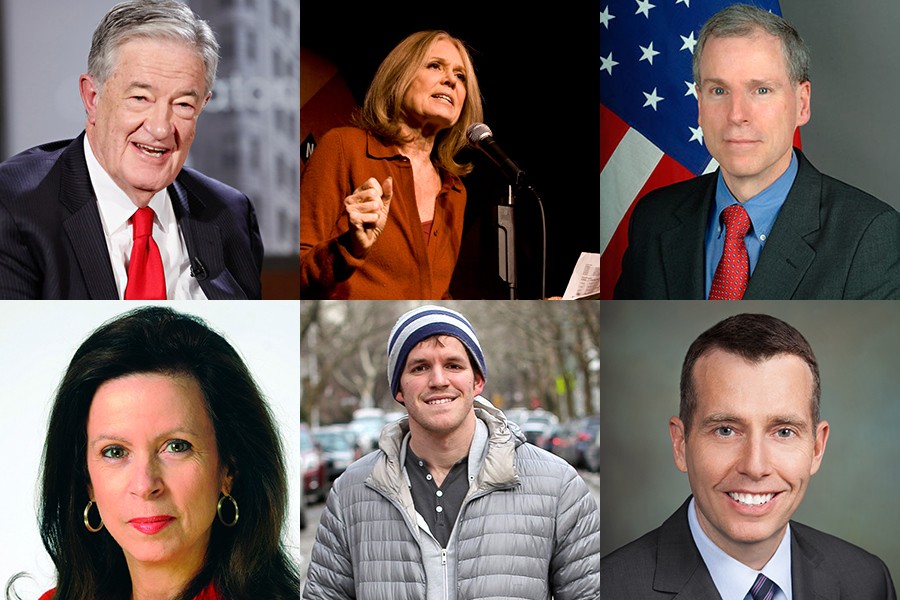 The creator of the popular Humans of New York blog, feminist icon Gloria Steinem, and Obama campaign strategist David Plouffe are among the speakers coming to Johns Hopkins University as part of the 2015 Foreign Affairs Symposium.

All of the events are free and open to the public, though reserved seats are available for $25 and can by purchased in advance through jhutickets.com. Each event (except the April 7 FAS Unplugged event) will be at 8 p.m. in Shriver Hall Auditorium on the university's Homewood campus (doors open at 7:30 p.m.). FAS Unplugged will take place at Mudd Hall.

Jack Devine, Feb. 11: An internationally recognized expert in intelligence matters, Devine served as acting director and associate director of the CIA's operations outside the U.S. as well as chief of the Latin American division and head of the Counternarcotics Center. He was awarded the Meritorious Officer Award for leading the CIA's Afghan Task Force, considered the largest covert action campaign of the Cold War. In June he published Good Hunting! An American Spymaster's Story about his career.

Gloria Steinem, Feb. 25: Steinem is a prominent feminist and social activist who became famous with her 1969 essay, After Black Power, Women's Liberation. She helped to create New York and Ms. magazines as well as the National Women's Political Caucus. She has been an outspoken critic of war and violence, pledging not to pay taxes during the Vietnam War and campaigning for anti-war leaders. She co-founded the Women's Media Center in 2005, and in 2013 she received the Presidential Medal of Freedom for her dedication to women's rights.

ISIS panel, March 11: A panel of experts will discuss the extremist group Islamic State of Iraq and Syria (ISIS). Guests include Robert Ford, former U.S. ambassador to Algeria and Syria; Hadi al-Bahra, president of the National Coalition for Syrian Revolution and Opposition Forces; and journalist Robin Wright, who has covered the Middle East extensively for The Washington Post. The moderator will be David Faris, a professor at Roosevelt University. Ambassador Ford, who earned a bachelor's degree from Johns Hopkins in 1980 and a master's from the university's School of Advanced International Studies in 1988, served as ambassador to Algeria for two years and as ambassador to Syria for more than three years.

Brandon Stanton, March 25: Stanton is the photographer behind the award-winning Humans of New York blog. His keenly observed portraits and interviews of everyday New Yorkers on the street have generated more than 11 million likes on Facebook. A Georgia native and University of Georgia alum, Stanton started Humans of New York in 2010 after working as a bond trader in Chicago. His Humans of New York book has topped the New York Times non-fiction bestseller list for two years.

FAS Unplugged, April 7: "A Discussion of Crime and Punishment in 21st Century America" with Karen Miner-Romanoff, Franklin University's dean of the College of Health and Public Administration. Miner-Romanoff is a prominent criminologist and researcher in the field of juvenile delinquency and an expert in crime control. Note: This event will take place in Mudd Hall

David Plouffe, April 13: Plouffe is a political strategist best known for his work with President Obama's 2008 and 2012 campaigns. He also served on the successful campaigns of Senator Tom Harkin, Congressman John Olver, Senator Bob Torricelli, and Governor Deval Patrick. He is the author of The Audacity to Win: The Inside Story and Lessons of Barack Obama's Historic Victory. Since August, he has served as senior vice president of policy and strategy at Uber, the app-based ride-sharing service.

The annual Foreign Affairs Symposium, founded in 1998, is run by Johns Hopkins students and sponsored by the university's Office of Student Development and Programming.