Men's basketball players both reached 1,000 points for their careers during win against Muhlenberg last month 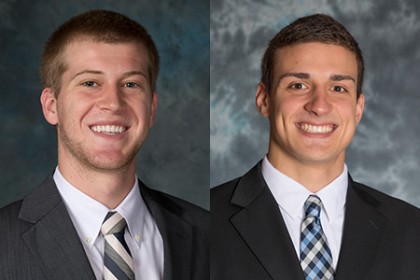 Seniors George Bugarinovic and Jimmy Hammer, who both reached the 1,000-point mark for their careers in the Blue Jays' win against Muhlenberg on Dec. 6, were among the athletes spotlighted in the Jan. 19 installment of Sports Illustrated's long-running "Faces in the Crowd" feature. They became the 15th and 16th players in school history to surpass 1,000 points. From SI:

Johns Hopkins seniors Bugarinovic, a forward, and Hammer, a guard, both reached 1,000 career points in an 87-77 win over Muhlenberg. Bugarinovic achieved the milestone in the first half, and Hammer joined him with 2:10 to play.

Bugarinovic carries a 3.84 cumulative grade point average, and Hammer has a 3.54. Both players had 4.0 GPAs during the fall semester.

The Blue Jays (14-2, 8-1 in the Centennial Conference) have won 11 consecutive games and are ranked No. 24 in the nation among Division III teams.

"Faces in the Crowd," which first appeared in Sports Illustrated in 1956, spotlights the accomplishments of unknown or amateur athletes. Athletes featured in the past include golfing greats Jack Nicklaus and Tiger Woods, tennis champions Arthur Ashe and John McEnroe, Olympic gold medal sprinters Wilma Rudolph and Jackie Joyner-Kersee, and chessmaster Bobby Fischer.