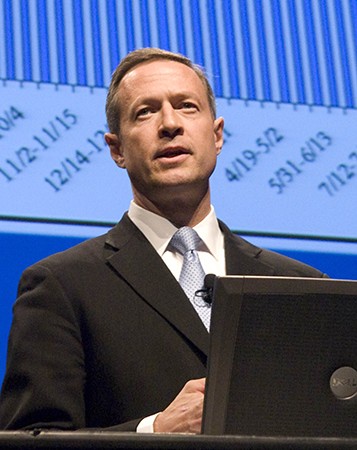 O'Malley, who on Jan. 21 concludes two terms as the state's chief executive, will participate in classes on such topics as leadership, infrastructure, entrepreneurship, and ethics. He also will work with other faculty members and students on their studies of management in the government sector.

The former Baltimore mayor and city council member will also be a part of Johns Hopkins' 21st century cities initiative, involving faculty members from disciplines across the university brought together to study and propose approaches to issues affecting cities, including economic growth, urban education, violence, urban health, and support for arts and culture.

"The Johns Hopkins Carey Business School is training students to be both business leaders and exemplary citizens who will improve society and increase value for all stakeholders," Dean Bernie Ferrari said. "Gov. O'Malley's wealth of experience and leadership will be a welcome addition to our faculty and in the classroom. We are delighted to have him."

Added Ronald J. Daniels, president of the university: "Gov. O'Malley has devoted his career to bringing data-driven decision-making to tackling our city's and state's most complex challenges. His insights and experience will be of enormous benefit to our students and faculty."

O'Malley, who will begin at Johns Hopkins on Feb. 2, is known as an innovator in management for the public sector. He developed a data-driven management system as Baltimore's mayor starting in 1999. The program, called CitiStat, provided leaders with frequent statistical performance updates department-by-department throughout city government, allowing the mayor and his appointees to identify problem areas and fix them.

When he became governor in 2007, O'Malley transferred the concept to the state level, creating StateStat and putting data online so that taxpayers, lawmakers, and researchers could track performance along with the governor, his cabinet, and staff.

O'Malley also incorporated his data-based management philosophy in his BayStat program, monitoring progress in restoring the Chesapeake Bay, and in the Genuine Progress Indicator, an index of economic, social, and environmental indicators measuring quality of life in Maryland. The index advanced 3.27 percent in 2013, the latest year for which full data is available.

"I am honored to join Johns Hopkins University, a world-class institution that has done so much for Baltimore and Maryland," O'Malley said. "As both a mayor and governor, I've worked to make government work better for all of our citizens through a relentless focus on data and transparency. Our efforts got results—driving violent crime down to record lows, recovering 100 percent of the jobs lost during the recession, and restoring the health of the Chesapeake Bay for generations to come. I look forward to sharing management insights from these past two decades with the next generation of leaders at Johns Hopkins."

O'Malley managed Maryland during the recession of 2008 and the subsequent recovery, cutting projected state spending while making strategic investments in education and infrastructure and maintaining the state's AAA bond ratings. He worked to raise the state's minimum wage to $10.10 by 2018; has promoted renewable energy, the restoration of the bay, and reductions in greenhouse gas emissions; and signed into law same-sex marriage equality in Maryland and a state-level version of the Dream Act providing access to public higher education for immigrants.