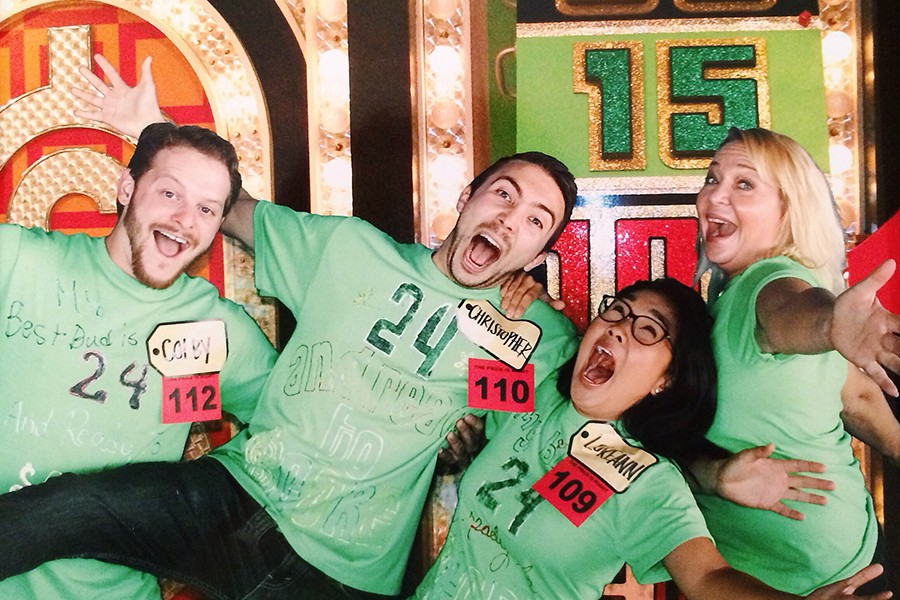 Image caption: Christopher Valenzuela (second from left) attends a taping of "The Price is Right" with his brother, girlfriend, and his mother, who gave him the tickets as a birthday present.

Christopher Valenzuela, come on down!

The 24-year-old master's candidate at the Johns Hopkins University School of Education attended a taping of The Price Is Right in October (a birthday present from his mom) and, as luck would have it, heard his name called in conjunction with the game show's trademark catchphrase, a delirious dream moment for a lifelong Price Is Right fan. Cue celebration.

Valenzuela will be among the contestants on Friday's broadcast, which airs at 11 a.m. on CBS.

"I remember my name being called, then I was jumping up and down and hugging everyone, then racing up to the stage," says Valenzuela, who is enrolled in the School of Education's MSE Educational Studies program, an online program offered in partnership with Teach for America. "It was super-exciting—just tons of energy. Everyone was so excited and hyped up."

The excitement didn't end there. Valenzuela placed a winning bid, went on stage to play one of the show's classic pricing games with host Drew Carey, and later got to spin the big wheel ("It was surprisingly heavier than I expected," he says). He can't reveal everything that happens—no spoilers here—but it's safe to say it was an experience he won't soon forget.

"Drew was really great—he was funny and engaged with the audience. It made it a really enjoyable show," he says. "And I loved the set—it still has its classic charm."

Valenzuela, who earned a BA in politics from University of California, Santa Cruz, in 2012, expects to complete his master's program in the spring of 2016 and plans to go into education policy. He currently works for City Year, an education nonprofit, mentoring and tutoring at-risk students at a high school in Los Angeles' Watts neighborhood.