Hairy, scary Krampus is the mythological beast of holiday nightmares

Creature of Alpine folklore embraced as symbol of winter revelry

Long before Dr. Seuss gave us the Grinch, the people of Europe's Alpine region created the original "mean one" of the Christmas season—Krampus. 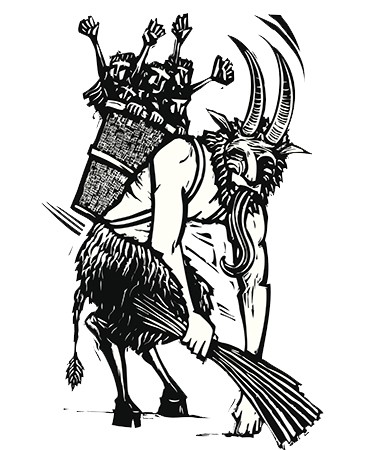 Cuddly as a cactus, charming as an eel, the hairy, scary, rusty-chain-rattling Krampus is a mythological fanged creature who is said to punish children who misbehave—and occasionally haul off especially naughty ones. (Jeez—all the Grinch ever did was steal a few presents and a roast beast or two).

More from The Baltimore Sun:

The Krampus tradition traces its origins back to 1600s Austria, where a horned figure would accompany a man dressed as St. Nicholas on Dec. 6, the saint's feast day.

While St. Nicholas would offer small gifts to good children, the Krampus would rattle chains and shake a bundle of birch switches to intimidate bad ones.

"The Krampus figure represents the horrors of winter in a small Alpine village," Peter Jelavich, a professor of European history at the Johns Hopkins, told The Sun. "He represents the scariest part of winter."

For many in the U.S., he also represents an alternative to the excesses and rampant commercialism of the holiday season, a sort of anti-Santa Claus. In recent years, Krampus celebrations have popped up across the country, from New York to Chicago to Los Angeles. Baltimore's first-ever Krampuslauf—which will include the singing of Krampus carols and a visit to Hampden's famous 34th Street light display—takes place Friday.

"A lot of this is people who don't want to put their Halloween costumes away. ... It's another version of Carnival and Mardi Gras," Earle Havens, Johns Hopkins history professor and curator of rare books, told The Sun. "With the masks, your identity is hidden and you can get away with a lot of disorderly activity."