The Johns Hopkins men's lacrosse team is ranked No. 5 nationally in the 2015 preseason rankings published by Inside Lacrosse in its Face-Off Yearbook.

The Blue Jays, who went 11-5 last season and advanced to the NCAA quarterfinals before being eliminated by eventual national champion Duke, return three of their top four scorers from last season (Wells Stanwick, Ryan Brown, and Holden Cattoni), senior defenseman Michael Pelligrino—a second-team All-American in 2014—and goalkeeper Eric Schneider, who started all 16 games in net for Hopkins a year ago. JHU also welcomes the nation's No. 1 recruiting class, according to Inside Lacrosse, led by the publication's top-ranked incoming freshman, Shack Stanwick (younger brother of Wells Stanwick).

Johns Hopkins opens its season on Feb. 7 against UMBC and will compete as a member of the Big Ten Conference for the first time this season.

Denver tops the Inside Lacrosse preseason rankings, with Notre Dame, Duke, Syracuse, and JHU rounding out the top five. The Face-Off Yearbook, which ranks all 69 teams in Division I and also features DII, DIII, MCLA, JuCo, and women's rankings, is on sale now. More information can be found at insidelacrosse.com. 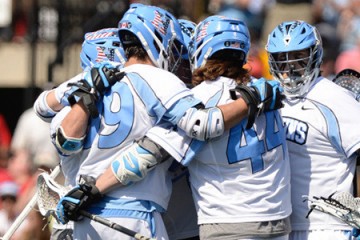