Senior defensive linemen Longo, Rocca are among 10 JHU players to receive honor in past four seasons

Two Johns Hopkins senior defensive linemen, Michael Longo and Michael Rocca, have been named to the 2014 CoSIDA/Capital One Academic All-America Division III football teams released earlier this week. Longo was named to the first team, and Rocca was a second-team pick. The selection is the first for both players 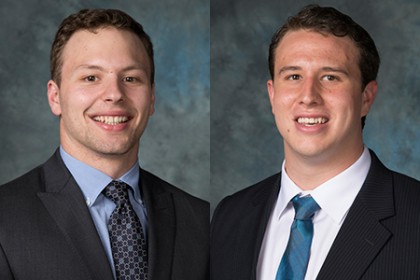 Longo, the 11th first-team academic All-American in the program's history, was named Centennial Conference Defensive Player of the Year after a season in which he totaled 54 tackles (including a team-high 14.5 for loss) and 11 sacks. A public health major with a 3.74 cumulative grade point average, he spent three and a half weeks in Uganda last January doing research focused on initiatives serving children. He has also been an active volunteer with Habitat for Humanity and served as a research assistant at Baltimore Station South, where his primary focus was researching and analyzing data in the area of addiction. In addition, Longo has worked with the Pen Lucy Tutoring Program, tutoring young Baltimore students in math and reading/comprehension.

Rocca, also a first-team all-conference selection this season, posted career highs of 54 tackles, eight tackles for losses, and five sacks. He carries a 3.75 cumulative grade point average and is also majoring in public health. Rocca served as a clinical research assistant and Medical Tutorial participant at the Johns Hopkins Medical Institute in the Department of Orthopedic Surgery, and he completed a Career In Medicine Internship at Hackensack University Medical Center in the Department of Emergency Trauma. He has also been an active volunteer with the Pen Lucy Tutoring Program in Baltimore.