Football: Johns Hopkins comes up short at Hobart in second round of NCAA DIII playoffs

The loss was the first of the season for the sixth-ranked Blue Jays (11-1), who twice moved the ball inside the Statesmen's 10-yard line in the final period only to have their drives end with turnovers. Hobart (12-0), ranked No. 7 nationally, advanced to the national quarterfinals, where it will meet Wesley, a 59-0 winner against MIT.

JHU took a 21-16 lead 14:33 to play when senior quarterback Braden Anderson found Quinn Donaldson for a 28-yard scoring pass. Earlier, the tandem had hooked up on a 3-yard scoring strike.

The Blue Jays got the ball back with 9:12 remaining and drove to Hobart's 8-yard line, but an errant pitch attempt by Anderson was recovered by by Hobart's Jake Russell. The Statesmen then marched 88 yards in nine plays, a drive capped by a 14-yard touchdown pass from Patrick Conlan to John Fasano. A two-point conversion put the hosts ahead 24-21.

Johns Hopkins had a chance to win or tie in the closing seconds as it again drove to Hobart's 8. But a would-be go-ahead touchdown pass from Anderson to Donaldson with 19 seconds remaining was negated by a pass interference penalty against the Blue Jays. On the next play, Anderson's pass attempt was intercepted by Hobart's Jacob Stanley.

Anderson threw for 185 yards and ran for 72 to lead JHU's offense, but he also committed three turnovers. Donaldson had five catches for 63 yards, Bradley Munday added six catches for 79 yards, and Stuart Walters ran for 65 yards on 13 attempts.

Defensively, the Blue Jays were led by senior Michael Rocca, who posted a career-high 12 tackles, and sophomore Jack Toner, who added 10 stops on the day. 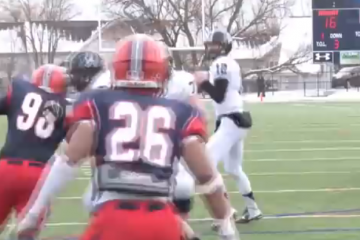