The Johns Hopkins football team has placed 12 players on the 2014 All-Centennial Conference football teams, including senior defensive end Michael Longo, the league's defensive player of the year. JHU coach Jim Margraff was named the conference's coach of the year for the third time in the past four seasons after guiding the Blue Jays to a 10-0 record. 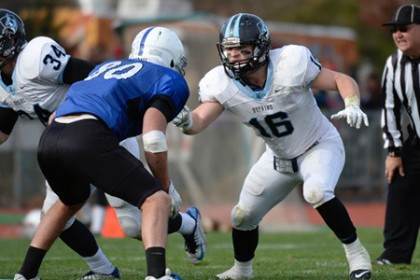 Margraff has guided the Blue Jays to a school-record 11 wins thus far this season along with a sixth straight Centennial Conference title and a fourth consecutive appearance in the NCAA Playoffs. Earlier this season, he became the winningest football coach in Maryland state history, and he owns an overall record of 178-82-3 in 25 season.

The Blue Jays visit Hobart on Saturday in the second round of the NCAA Division III tournament.