The Johns Hopkins women's soccer team secured its first-ever trip to the semifinals of the NCAA Division III tournament over the weekend, defeating sixth-ranked Carnegie Mellon and No. 9 Thomas More on consecutive days to earn a trip to Kansas City, Missouri.

The No. 20 Blue Jays (19-3-2) edged the Tartans in a penalty kick shootout on Saturday, the topped the Saints 1-0 on Sunday. JHU will face No. 5 Williams on Friday, Dec. 5, at Swope Soccer Village, the official training facility for MLS's Sporting Kansas City club. The other semifinal will feature top-ranked Lynchburg and unranked Illinois Wesleyan, with the winner squaring off for the national championship on Saturday, Dec. 6, at 2:30 p.m.

It was a memorable weekend for Johns Hopkins, which was making its seventh consecutive appearance in the tournament's round of 16 but had never reached the semifinals.

JHU's run nearly came to an end against host Carnegie Mellon, but Hope Lundberg scored an equalizer in the 88th minute to tie the score at 1 and force extra time. In the penalty kick shootout, the Blue Jays converted four of six shots, and freshman goalkeeper Clara Aranguren made three saves to send her team through.

On Sunday, Johns Hopkins got by Thomas More on an own goal, as a Saints defender knocked the ball past her own goalkeeper in the 38th minute. JHU held on despite being outshot 10-4, as Aranguren came up with six saves. 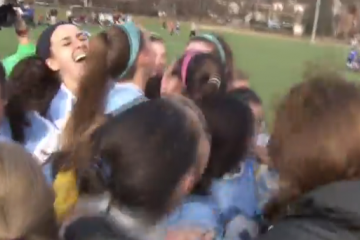