Anderson throws for 3 scores, JHU moves on to face Hobart

The Blue Jays (11-0) advanced to the second round for the third time in six seasons.

Anderson connected on scoring passes of 31 yards to Quinn Donaldson and 48 yards to Ryan Finkel in the first quarter as JHU raced to a 14-0 lead. The Profs (7-4) closed to within 14-10 at halftime, but Anderson capped a 10-play, 65-yard drive with an 8-yard scoring strike to Donaldson early in the third quarter to put Johns Hopkins comfortably ahead.

Rowan closed within one score with a touchdown with 51 seconds to play, but JHU's Brandon Cherry recovered the ensuing onside kick.

JHU will visit Hobart in a second-round game on Saturday at noon at Boswell Field in Geneva, N.Y. The Statesmen (11-0) defeated Ithaca 22-15 on Saturday. The two teams have met twice, with Hobart winning both matchups, in 1965 and 1966.

A complete Division III playoff bracket can be found at ncaa.com. 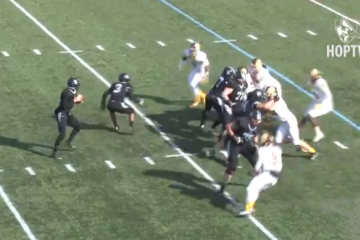