The Johns Hopkins University women's soccer team cruised to its seventh consecutive appearance in the NCAA Division III tournament's round of 16 with a pair of victories at Homewood Field over the weekend.

The Blue Jays (18-3-1) blanked Farmingdale State 4-0 in a first-round matchup on Saturday, then followed that up with a 3-1 victory against SUNY Geneseo on Sunday. JHU advanced to face Carnegie Mellon, which earned a 2-1 overtime victory against Catholic on Sunday.

Sydney Teng, Hannah Kronick, Alaina Arthur, and Alexa Rangecroft all scored against the Rams (14-6-3) on Saturday in a game in which Johns Hopkins owned 19-1 edge in shots.

On Sunday, Bailey Monaco got the Blue Jays off on the right foot with a goal in the 18th minute against the Knights (16-3-3), and Arthur and Kronick scored after halftime as JHU advanced comfortably.

The Blue Jays and Tartans (16-2) will meet on Saturday at 11 a.m. at Carnegie Mellon, with the winner advancing to Sunday's quarterfinal. JHU has been eliminated in the national quarterfinals in four of the past five seasons. 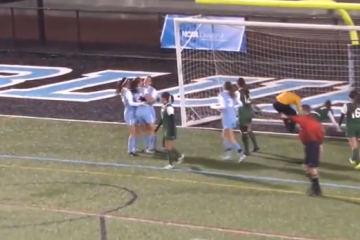