The Johns Hopkins University football team scored three touchdowns in the first 10 minutes Saturday and stormed to a 48-17 victory against McDaniel at Homewood Field to capture their fourth consecutive Centennial Conference championship.

The seventh-ranked Blue Jays, who capped a perfect 10-0 season with the win, host Rowan (7-3) in an NCAA Division III tournament first-round game on Saturday at noon. The winner of will face the winner of the first-round matchup between Hobart and Ithaca in a second-round game on Nov. 29.

JHU improved to 43-1 in its past 44 regular-season games, and the current senior class owns a 40-4 record during their careers. That includes a 20-0 mark at Homewood Field.

On Saturday, Brandon Cherry opened the scoring for Johns Hopkins with a 14-yard touchdown run, and quarterback Braden Anderson accounted for two scores (one run, one pass) in a 45-second span as the Blue Jays took control early against the Green Terror (1-9). JHU led 41-7 at halftime en route to its 14th consecutive win in the series. 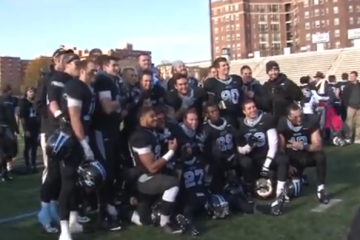