In 2013, 14% of graduating class took positions in financial services

When it comes to picking stocks, Johns Hopkins University alumni may be some of the best in the game, according to a recent study by SumZero published in The Wall Street Journal. 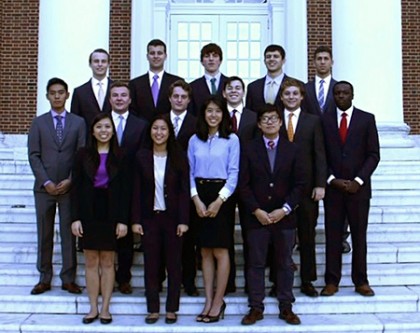 In order to determine what schools produce the most effective investors, SumZero—the world's largest online community of investment professionals—sorted the 6,000 to 6,500 stock picks submitted by its users since its inception in 2008 by what undergraduate school the user had attended. For schools to be included in the study, the company required a minimum level of participation from the schools' alumni: They had to have at least 20 graduates who contributed at least 20 ideas, or at least 10 graduates who contributed at least 30 ideas. Of the 29 schools that met these requirements, the performance of JHU graduates' stock picks ranked 12th best, coming in ahead of schools such as Harvard and Columbia.

The quality of investors produced by JHU has not gone unnoticed. According to Sarah Reifer, assistant director and career counselor at the JHU Career Center, there has been a significant increase in finance recruiting on campus. This fall alone, students have had the opportunity to network or interview with each of the nine "bulge-bracket" banks: Bank of America Merrill Lynch, Barclays, Citi, Credit Suisse, Deutsche Bank, Goldman Sachs, J.P. Morgan, Morgan Stanley, and UBS. Students in the graduating Class of 2015 have already accepted offers at eight of these companies.

"This increase in engagement speaks not only to the dedication of our alumni partners but just as importantly reflects the impressive quality of Hopkins candidates," Reifer said.

Financial services and investment banking is the second most popular area of employment for JHU graduates. In 2013, 14 percent of the graduating class took positions in this field. While employment statistics are currently being compiled for the Class of 2014, the Career Center expects to see similar numbers.

"Since Hopkins is not a target school for the major banking firms, our students find ways to complement their major with other relevant coursework and extracurriculars that build their resumes and make them more competitive," said Annette Leps, senior lecturer for the Center for Leadership Education in the Whiting School of Engineering.

Two of the ways JHU students can position themselves to be chief candidates for top finance positions is by taking courses such as Financial Accounting and Financial Statement Analysis through the CLE and by participating in the Marshal L. Salant Student Investment Team, Leps added.

The Marshal L. Salant Student Investment Team, which is overseen by Leps, provides students with a hands-on opportunity to manage securities in a $250,000 portfolio that operates as part of the university's endowment. A portion of profits earned by the portfolio go toward scholarship support for undergraduate students in the Whiting School and the Krieger School of Arts and Sciences.

Current senior and Salant Portfolio Manager Simon Osipov said the team teaches students to think critically about companies and industries and helps them to be exacting in their investment decisions. Each of the team's 18 members is required to pitch at least one stock each semester.

"When a member goes to pitch a company, everyone asks hundreds of questions, requiring the presenter to know as much as possible about the investment," Osipov said. "This causes our members to be obsessed about turning over every stone before presenting. I believe this mentality sticks with our members as they graduate and makes them better investors."

The Salant team has continually made sound investment decisions since it was founded in 2000 with a grant from JHU alumnus Marshal Salant. The donation, which totaled $100,000, has had a compound annual growth rate (CAGR) of 13.5 percent, notably surpassing the 5.3 percent CAGR of the S&P 500 and outperforming this benchmark for seven of the last nine years.

When the team decides to purchase a new stock, the member who pitched it is responsible for monitoring its performance and presenting the team with his or findings at the end of each semester. The team typically focuses on purchasing stocks from companies that are undervalued in the market, known as value investing.

"Value investing requires a lot of work because it necessitates deep knowledge of the company, its market and appropriate valuation methods," Osipov said.

That hard work and dedication pays off when it comes to the health of Salant's investment portfolio. For instance, this past March, the Salant team inherited shares of Knowles Corporation, a communication technology company, after it spun off from its parent company, Dover Corporation, in which Salant already owned shares. After extensively researching the Knowles Corporation, the team decided to sell their shares. A week later, the value of the stock fell 30 percent.

"Investing requires two things: making the right decision and doing it at the right time," Osipov said. "These are hard elements to get right, but when we do, it is very exciting."

The investment skills students develop as members of Salant make them attractive candidates for top jobs in finance. Evidence of this can be seen in the post-graduate success of the team's members. Six Salant members from the Class of 2014 accepted positions at some of the world's largest and most profitable multi-national investment banks: Bank of America Merrill Lynch, Barclay's, Citi, Goldman Sachs, J.P. Morgan, and Morgan Stanley.

"That is a record number of members we have ever sent to investment banks straight out of undergrad," said Osipov, who will be starting a position in investment banking at Morgan Stanley after he graduates in May.

More students are starting to take note of the professional success of former Salant team members. During the team's last recruiting cycle in the spring of 2014, there was a 30 percent increase in the number of applicants as compared to the previous year.

"In recent years, team members have been very successful in landing summer internships and full-time offers at the top firms on Wall Street," said senior and Salant Director of Operations Demilade Obayomi. "This is very attractive to potential applicants as they view joining the team as a way to network with older members who have been through the recruiting process, and to learn technical skills attractive to firms on the Street."

Students interested in joining Salant are encouraged to attend one of the group's weekly public meetings on Sundays at 6 p.m., in Shaffer Hall, Room 3. The team is especially interested in recruiting engineering and science students, and anyone who can "think outside the box," Obayomi said. Recruitment for the team will open in the spring semester.