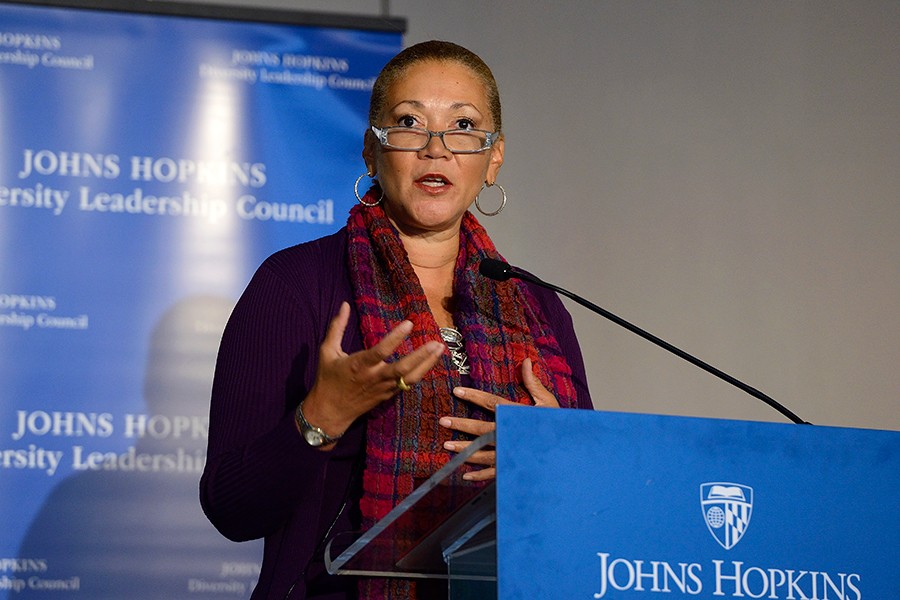 Michele Norris spent much of her career as a journalist trying very hard not to be the person who was always talking about race.

But she did just that as keynote speaker for Johns Hopkins University's 11th annual Diversity Leadership Conference on Wednesday afternoon, sharing how a series of left turns ultimately brought her right where she thought she didn't want to go.

Norris, a host and special correspondent for NPR, told the crowd gathered in the Glass Pavilion on the Homewood campus that her reluctance to talk about race came from her desire to cover other topics like finance, politics, and pop culture. She said she was afraid that if she made a habit of talking about race, that's the only way she would be seen by her colleagues.

"I pedaled backwards from that conversation as fast as I could," Norris said. "When you are a person of color in a majority white newsroom, you are expected to have facility and comfort with that conversation, and I didn't want to be pigeonholed as that person."

Norris said she came to see it was vital to create a space for these often difficult conversations when she was covering the 2008 presidential race. It was a time when some were espousing the beginning of a post-racial era in America.

"I remember when I first heard that word, I thought we were sending a message that race is no longer important," Norris said. "The idea that race as part of the discussion wouldn't be on the table even if a man of color moved into the White House? That was curious to me."

It led Norris and her NPR colleague, Steve Inskeep, to host a series of intimate conversations with voters from all walks of life to talk about what race meant to them. She also founded The Race Card Project, encouraging people to distill their thoughts about race, ethnicity, and cultural identity into just six words.

Norris commended the Diversity Leadership Council, which organized the conference, for leading the way in similar conversations here at the university, acknowledging that it isn't easy to get people to feel comfortable with the topic.

"I know your name is the Diversity Leadership Council, but I think of you as the diversity leadership community, because you have the power to create change and comfort levels," Norris said. "I applaud the work you do here because you are creating a community where people understand the importance of diversity, and that it need not be burdensome."

Norris's speech capped a day filled with workshops on diversity, including recruiting and supporting veterans, making campus more inclusive for the LGBTQ community, achieving gender equity in STEM fields, multigenerational communication in the workplace, unconscious bias in health care, understanding different religious traditions, and improving diversity through mentoring. In the morning, a plenary speech was given by Cheryl Holcomb-McCoy, vice provost for faculty affairs and a professor of counseling and human development at the School of Education.

So proud/glad that @JohnsHopkins VProvost of Fac Affairs is so knowledgeable, passionate &amp; active about diversity #leadership #DLCConf2014

While the annual conference is the Diversity Leadership Council's biggest event of the year, the group is working every day to make Johns Hopkins a more inclusive place. Diversity Recognition Awards honor faculty, staff, students, or groups fostering greater appreciation, advancement, and celebration of diversity and inclusiveness at Hopkins. The council also awards innovation grants to support innovative programming in line with its mission.