Kent Calder recognized for contributions to Japanese studies in U.S. 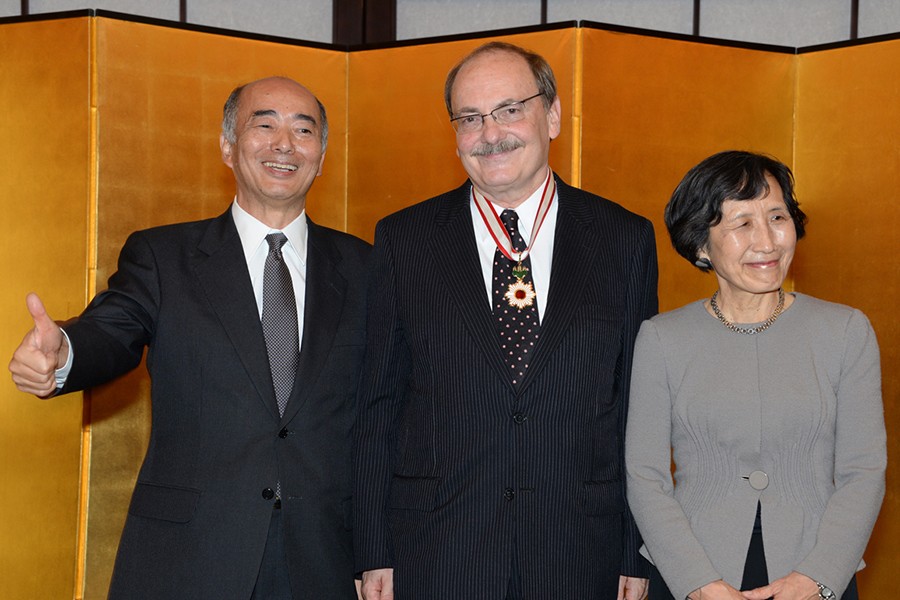 Kent Calder, director of the Edwin O. Reischauer Center for East Asian Studies and director of Japan Studies at the Johns Hopkins University School of Advanced International Studies in Washington D.C., was presented with the Order of the Rising Sun on behalf of the emperor and prime minister of Japan during a ceremony at the Japanese Embassy.

The Order of the Rising Sun, established in 1875 as the first national decoration of the Japanese government, is awarded to those who have made distinguished achievements in international relations, promotion of Japanese culture, advancements in their field, development in welfare, or preservation of the environment.

Calder was recognized for his "significant contributions to the development of Japan studies in the United States and the enhancement of mutual understanding between the two countries." He is one of 55 foreign recipients of the 2014 Spring Imperial Decorations, which were announced in April.

The honor was presented by Kenichiro Sasae, Japanese ambassador to the U.S.

Before joining SAIS in 2003, Calder taught for 20 years at Princeton. He served as special adviser to the U.S. ambassador to Japan from 1997 to 2001, Japan Chair at the Center for Strategic and International Studies from 1989 to 1993 and in again 1996, and as the first executive director of Harvard University's Program on U.S.-Japan Relations from 1979 to 1980. Calder received his PhD in 1979 from Harvard, where he worked under the direction of Edwin O. Reischauer.

More information and photos are available on the Facebook page of the Edwin O. Reischauer Center for East Asian Studies.