Construction at intersection of St. Paul, 33rd streets could begin by April 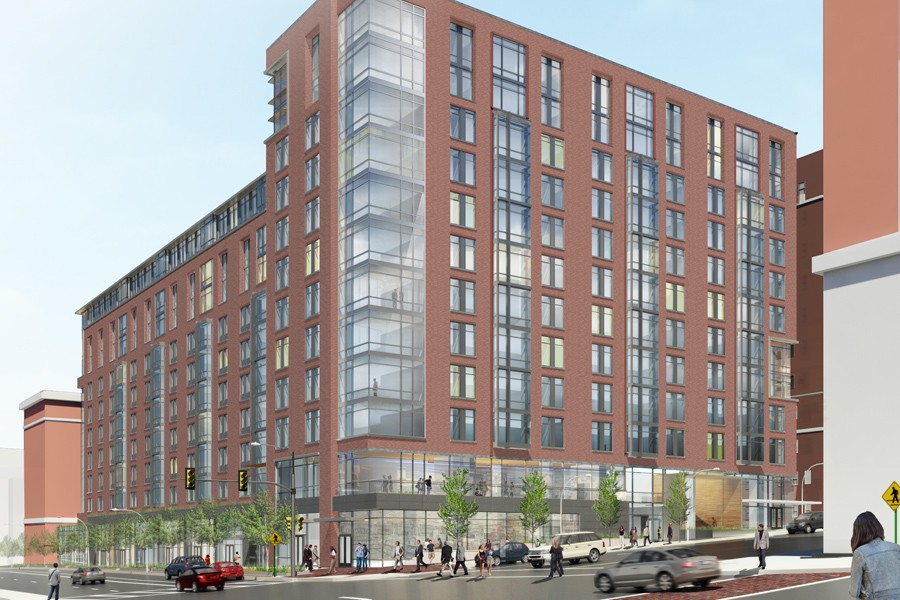 Image caption: An early conceptual design, for the purposes of discussion with the community and city, of the planned mixed-use development on Johns Hopkins University property at 3200 St. Paul St. in Baltimore. It is not a final design.

Market-rate student apartments combined with retail space, restaurants, and parking could be under construction by spring on Johns Hopkins University property at St. Paul and 33rd streets in Baltimore's Charles Village neighborhood.

The project—about a block away from the university's Homewood campus—is expected to include 157 student apartments and 31,500 square feet of commercial space. Both will wrap around a parking structure with 162 spaces for use both by tenants and the public. A 10,500-square-foot pharmacy is proposed for part of the commercial space.

The most recent conceptual design is for a 12-story building, slightly taller than the adjacent Blackstone Apartments at Charles Street and 33rd. The height is within North Charles Village Planned Unit Development guidelines.

Assuming all approvals are granted, construction is expected to begin in April 2015 so that student tenants can occupy the building by the start of the fall 2016 semester.

"Charles Village is by every measure an extraordinary neighborhood and one that Johns Hopkins is proud to call home for our main campus," said Daniel Ennis, the university's senior vice president for finance and administration. "The addition of this project will accelerate the momentum our neighborhood is already experiencing and add to quality of life for our neighbors as well as for our students, faculty, and staff."

Kevin Shollenberger, vice provost for student affairs, said the project will add to the convenient options available to undergraduate students after two years in university housing.

"We are excited about this development and the opportunities it will provide for juniors and seniors," Shollenberger said. "This new housing option and convenient shopping and dining opportunities for all our students will be a major 'plus' for our undergraduate experience."

The development team chosen by the university—Armada Hoffler Properties Inc. of Virginia Beach, Virginia, and Baltimore's Beatty Development Group LLC—has been working since 2012 on programming the building, specifying what elements it should contain to meet the university's goals of providing housing alternatives for students and promoting the continued renaissance of Charles Village.

The development team will present concepts for the building's design to Baltimore City's Urban Design and Architecture Review Panel at a meeting on Oct. 23. It recently presented to the North Charles Village Planned Unit Development's design review committee.

The project has not yet been named, but it is being referred to for now as 3200 St. Paul. Johns Hopkins bought the 1.13-acre site in 2009 from a development group whose plans had been stalled by the national financial crisis. The property is on the southwest corner of the intersection of St. Paul and 33rd, the same intersection where Johns Hopkins in 2006 opened its Charles Commons mixed-use residence hall project on the northwest corner. The 68-unit Village Lofts condominium is on the southeast corner.

Planning for redevelopment of all three sites began in 2003; the so-called Charles Village Projects were the result of close collaboration among the local community, the university and private companies. The simultaneously launched efforts were intended to promote the vitality and livability of the neighborhood adjacent to the university's Homewood campus.

The university and developers recently finalized a long-term lease on the university's property. The student apartments in the completed project will be leased on the open market, not as part of the university's housing system. They will be managed by Capstone On-Campus Management of Birmingham, Alabama, which runs student housing at campuses nationwide, including Maryland-College Park, Maryland-Baltimore, UMBC, and Towson University.