Insects have always fascinated Gregory Wiedman, a materials science graduate student who has been able to connect his bug-collecting hobby with his research. 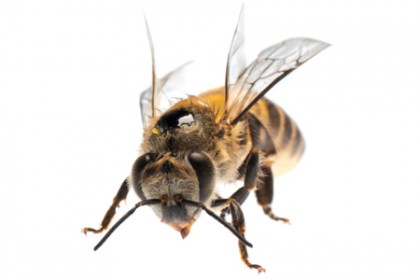 In the lab of Kalina Hristova, a professor of Materials Science and Engineering at Johns Hopkins University, Wiedman is attempting to develop a new drug delivery system based on a toxin found in honeybee venom. His work is described in the Summer 2014 issue of JHU Engineering magazine.

The toxin, melittin, is a peptide—a short string of amino acids—that kills cells by drilling holes in their protective outer membranes. Scientists have been trying to harness this property to destroy tumor cells. But melittin attacks indiscriminately, killing healthy cells along with cancerous ones.

Wiedman is trying to engineer the peptide to pierce cell membranes in response to a specific pH level. Because tumors are known to have lower pH than blood, the idea is that pH-triggered melittin would only destroy cancer cells. The engineered peptide could also be used to effectively deliver cancer drugs inside tumors.

Wiedman has created a library of more than 18,000 peptide mutations. He is now testing these mutations in the lab to see which one has the desired pH sensitivity. The challenge, he says, is to change just the right number of amino acids so that the melittin becomes pH-sensitive but doesn't lose its crucial cell-puncturing property.