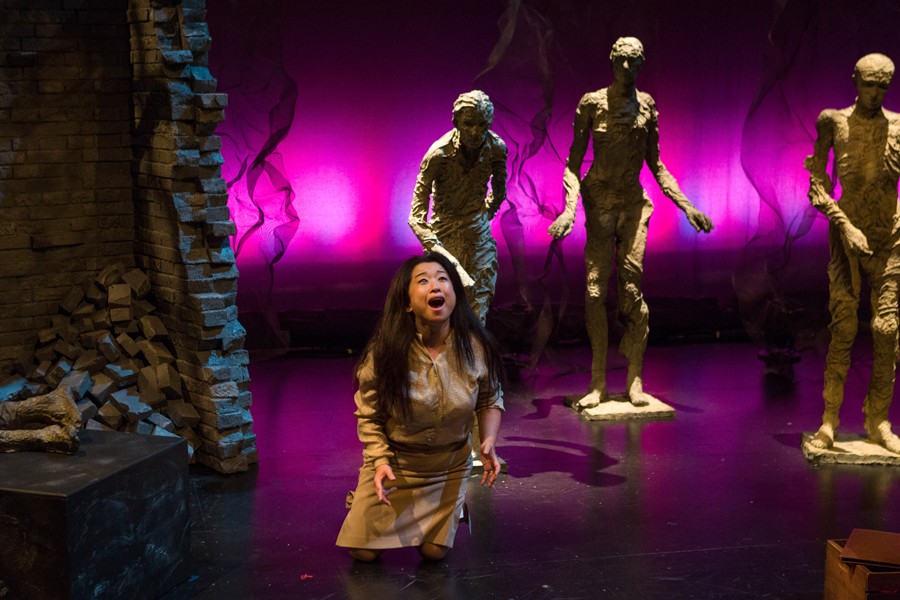 The road to On the Threshold of Winter has been long, arduous, and deeply personal for composer Michael Hersch, the chair of the Composition Department at the Peabody Institute.

As chronicled in recent stories in The New York Times and The Baltimore Sun, Winter's emotional terrain is rooted in confronting cancer's horrible toll. Over the past decade, Hersch lost a close friend to the disease, was diagnosed and fought cancer himself, and came across The Bridge, Marin Sorescu's book-long poem on mortality written in the weeks leading up to the Romanian writer's final battle with terminal illness.

Winter, Hersch's first opera, received its world premier June 25 at the Brooklyn Academy of Music, and judging by the reviews in The New York Times, the Philadelphia Inquirer, and The New Criterion, it is a powerfully indelible experience.

Richard Anderson, the director of last year's documentary short "The Sudden Pianist" about Hersch as performer, created a short trailer for the opera.

The Hub caught up with Hersch by phone to talk about writing so directly from experience and confronting those inevitable human fears that far too often get glossed over in public discussions of terminal illness.

In the trailer you talk about the personal backstory to your relationship with cancer—a friend's diagnosis and treatment, followed by your own, and coming across Sorescu's The Bridge—was it this confluence of events that pushed you in the direction of writing this work? Had you been thinking about writing an opera before and just not finding the right narrative, topic, emotional journey, etc., that you wanted to address?

Yes. I've been considering composing a work for the stage for over two decades, but did not follow through until writing "On the Threshold of Winter." When I was in my twenties there were a number of texts: plays, short stories, novels, poetry collections . . . there were a number of sources I felt drawn to and seriously considered, but something always stopped me in the end. I think that the texts I was drawn to most didn't need me; that putting music to these texts somehow would be additive in a manner which wasn't really justified. I do incorporate texts fairly frequently in my work, but those texts are rarely sung or spoken. Specific texts often come to mind when I'm writing. They're not necessarily influencing the music; they simply come to mind, resonate with me on some fundamental level, and I feel the need to put them down.

By the time I entered my thirties I realized that should I ever write for the stage it would likely be in a fairly unorthodox manner, and this realization clarified things for me.

Everything I've written is obviously a product of my life and experience, but this particular piece was informed by specific events in a manner most of my work is not. In this case, these events all being related to cancer—the death of a close friend from the illness, and my own bout with the disease.

Not long after these events I came across Marin Sorescu's "The Bridge" and found so much of what I'd experienced there on those pages. Sorescu meets the often-horrifying realities of the disease head-on and the situations those realities yield, in a manner which reflected my own interactions with it—both as a witness and as a patient. Soon after reading the book I decided to write the opera.

I was going to ask what you responded to in the Sorescu. I haven't read the entire work, only excerpts, but it is incredibly blunt, which is refreshing. What about it did you respond to so strongly?

In our society there are many things glossed over when we speak of illness, especially terminal illness. What Sorescu embraces, what I think is rare to find in modern discourse about terminal illness, is that element of raw fear, the uncertainty, the abject terror of the unknown that is so much a part of the experience.

The irony is that most everyone has had somebody close to them suffer from this disease, and have been privy to what the illness does to people. Consequently, for most people what Sorescu discusses in "The Bridge" will not be foreign terrain. They went through what he writes about with their mother or father, sister or brother, husband or wife, themselves. . . . When we discuss terminal illness openly, more often than not there is a patina of optimism, which often signals if you just fight hard enough things are going to be OK. Often times, even if one survives, things are irreparably damaged both physically and psychologically. Much is not OK. The experience of personally having a taste of the disease, but even more so seeing someone I cared about suffer and ultimately succumb—someone in the absolute prime of her life, how her illness affected not just her but those around her—shook me. When I read the Sorescu I recognized what he was talking about. This is not to say that once the disease strikes all joy and good leaves life. That's absurd. Joy, humor, compassion, love . . . these things continue, often thrive. It was Sorescu's ability to at once capture all of it, but with the ever-present sense of threat which pervades almost everything.

I'm glad you brought up all of these uncertainties—fear, terror, the unknown—these are the words we use for these experiences you're talking about, but when you're going through them those words are, to me, wholly inadequate for the emotional state they're trying to convey. So how did you address this notion, working with a text that is trying to convey these emotions but understanding their limits? I ask because music can often do things that language cannot.

Yes, there are limits to what words can accomplish, but I believe there are also limits to what music can accomplish. Each has a unique role. In the case of this work, I selected the texts because I felt they were necessary. It was important to me that people heard Sorescu's words as part of the work. I have no problem saying the words are in the service of the music, just as I have no problem saying the music is in the service of the words. They're both. They're inextricably linked.

You mentioned that you've used text before, but not always with the intention to be sung. What's your approach to writing for voice? And did you choose soprano for any specific reason?

I don't write for voice very often. If I look back over my life as a composer I seem to write for voice about once a decade. However, this is not a reflection of how I feel about writing for voice. I find there's a particular kind of intimacy and intensity when one sets something for the human voice that's unique, and if anything I feel so connected to it that I only want to write for it in instances where I can see no other possibilities. There just seems to be something in the sung human voice, which causes me to tread lightly before determining to write for it.

Regarding my choosing to write for soprano for the opera, that is the voice type I heard in my mind's ear. But while the character is no doubt a woman, my feeling about her character is that she's everyone. My hope is that the piece conveys a human experience.

When we first started talking you mentioned the size and scope of the production, how a visual component adds these coordinated layers. When did you start thinking about this piece's look? During the writing of the music? When it started to be produced? Did you have specific visual ideas in mind?

From the beginning my intention was always that it would be staged, not sung as an outsized song cycle. That said, whatever limited skill I have doesn't extend to staging. I had a vague idea of what I wanted, but it wasn't something I spent a great deal of time thinking about. It was one of those things where I knew very much what the staging shouldn't be, but not enough to know what it could be.

Where things have ended up feels right to me. I feel the director did a good job. One of my closest friends is a sculptor named Christopher Cairns. To say I admire his work immensely is a huge understatement; it's terribly important to me. He has this remarkable studio in Pennsylvania, and many years ago he asked if I would consider having some concerts in his studio. Once a year or so we do that. The director of On the Threshold of Winter, Roger Brunyate, came to one of these little concerts and he said, and I'm paraphrasing, "It's too bad we can't do the opera in here." He was serious about that, and over a period of about a year he came to figure out a way that we could use the Cairns sculpture as the primary material for the opera set. The fact that there are Cairns sculptures on the stage is very exciting for me. I also like the fact that the set is in large part made up of real art.

So the entire opera is feeling pretty right? On an emotional level?

I'm simply humbled and shocked at the amount of effort being put in by so many people on behalf of this piece. I'm not used to that. I'm not used to that kind of commitment beyond a very few individuals. Probably the most gratifying aspect of this whole experience is just that feeling. It's so positive, which is a nice thing to feel in the midst of something born out of difficult circumstances.