It was a working mother from Johns Hopkins who got to bring on the Working-Mother-in-Chief. 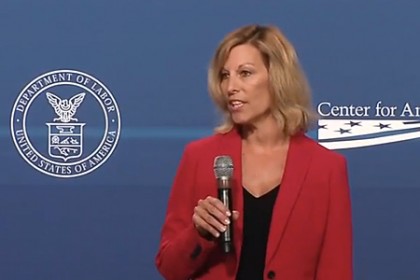 "It was an amazing experience," Leinz said after speaking for three minutes, without notes, from a stage vacated moments earlier by House Minority Leader Nancy Pelosi, D-Calif., and feminist Gloria Steinem.

"I was very nervous," Leinz said, "but I was able to meet Mrs. Obama before my remarks and she put me at ease. … We discussed how we both had two teenage daughters, mine just a bit older than hers. She said, 'Your daughters must be very proud of you,' and I said, 'We are all very proud of you!' It was a moment. I got a bit choked up. When I finally took the stage, the words flowed despite my nerves."

The White House summit, where President Obama spoke earlier in the day, was held to discuss workplace policies that make it possible for parents to do right by their kids while earning a living.

Leinz, who joined SAIS in 2006 to counsel students on career development, pointed out in her remarks that "the irony is that my own career [had been] on the back burner for a very long time." She cared for her daughters while she and her husband endured the frequent moves and deployments that came with his 23-year career as a Navy aviator.

When her husband retired, said Leinz, "it was finally time for me to get my career back on track."

"I am so very fortunate to have found an employer that values the concept of work-life balance," she told the summit audience. "Johns Hopkins understands and respects that my family is my top priority." Because of university policies like flexible schedules, paid sick and family leave, and tuition grants for college kids, "I am not only a better mother, but also a better employee," she said.

Leinz, a 2007 winner of Johns Hopkins' Martin Luther King Jr. Award for Community Service, was chosen to attend the summit by MomsRising, a grassroots advocacy organization with which she works. The group also forwarded to the White House comments she wrote about "the challenges of having a career as a military spouse and about how fortunate I felt to have found an employer that values the concept of work-life balance."

About a week before the summit, the White House called and asked her to do the first lady's introduction.

"I almost fell over," she said.