"It's so fitting to see Andrew's year end with a national title," said JHU coach Bobby Van Allen, who guided the Blue Jays' women's cross country team to its second consecutive NCAA title in the fall. "He put himself in that elite stage and just kept going. His confidence was overwhelming and a large part of his success. I'm ready to see the next chapter in his running career."

In the preliminary round, Carey broke his own school record with a time of 1:49.67, the best time posted by any Division III runner this season. Carey became the first two-time All-American in school history; he finished second in the 800 a year ago.

Carey has become the first-ever two-time All-American after finishing second in the 800 meter at the 2014 NCAA Indoor Championships. Mount Union won the team title with 47 points, ahead of Wisconsin-Lacrosse, which finished with 42.

Johns Hopkins' women's team finished tied for 23rd on the strength of a third-place finish by senior Maggie Shelton in the 800 and a fifth-place finish by sophomore Megan McDonald in the 400 hurdles. 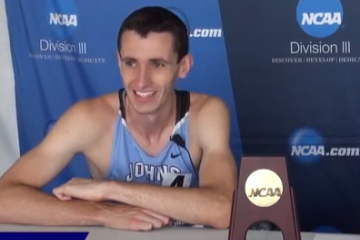