She leads No. 8 Blue Jays in scoring, is NCAA's active assists leader

Johns Hopkins senior attacker Taylor D'Amore, who led the Blue Jays with 48 goals and 43 assists this season, has been named the American Lacrosse Conference Offensive Player of the Year, the conference announced today. 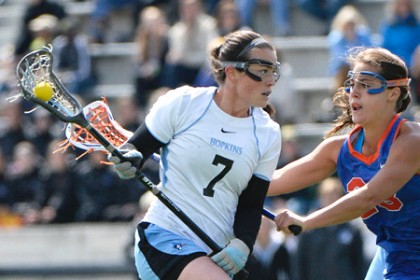 D'Amore, who was recently named a nominee for the prestigious Tewaaraton Award given to the best player in the country, was one of two JHU representatives on the conference's first team, along with senior Sammy Cermack. Sophomore Dene' DiMartino and freshman Haley Schweizer made the second team.

The No. 8 Blue Jays (14-3) are in Evanston, Ill., where they are the fifth seed in the ALC tournament and face fourth-seeded Penn State today at 3 p.m.