Edin, Silk bring to 28 the number of NAS members on JHU faculty

Two Johns Hopkins University professors are among 84 new members and 21 foreign associates elected to the National Academy of Sciences today in recognition of their distinguished and continuing achievements in original research, the organization announced in a news release. 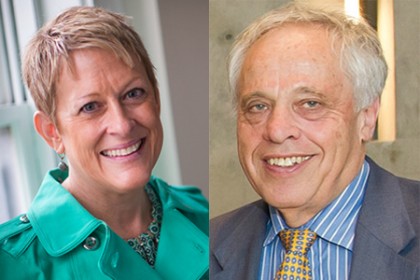 Kathryn Edin, a Bloomberg Distinguished Professor in the Department of Sociology, and Joseph Silk, the Homewood Professor of Physics and Astronomy, were selected by the academy, bringing to 28 the number current Johns Hopkins faculty members elected to the National Academy of Sciences.

As one of the nation's leading poverty researchers, sociologist Kathryn Edin provides a glimpse into low-income America: How do single mothers survive on welfare, and why don't more of them work? Where are the fathers, and why do they disengage from their children's lives? Can their lives change as a result of welfare reform? Edin came to Johns Hopkins from Harvard University, where she was a professor of public policy and chair of the Multidisciplinary Program in Inequality and Social Policy, for a Bloomberg Distinguished Professorship that spans the disciplines of sociology and public health.

Silk, who has written or co-authored more than 500 publications, conducted important early work on homogeneities in the cosmic microwave background and how they are influenced by density fluctuations in the matter of the early universe, in particular by a damping effect that bears his name. These were decisive contributions that helped transform cosmology into a high-precision science. He has also made pioneering advances in understanding the nature of dark matter and explored novel indirect methods for its detection. The latter have inspired very large experiments with new types of telescopes. Silk's studies of galaxy formation and his work on the dynamics of mass loss and the feedback mechanisms from star formation and evolution have formed a very significant basis for subsequent work in this important field.

Silk was awarded the 2011 Balzan Prize for his pioneering work on the infant universe. The $950,000 award is given annually to people or organizations that have made outstanding achievements in the fields of the natural sciences, humanities, and culture, as well as for peace-promoting endeavors.

A complete list of those elected can be viewed online.