Awareness campaign comes in response to growing number of pedestrian, distracted driving accidents on and around university's medical campus

In an effort to increase awareness about pedestrian and vehicle safety and reduce the incidence of pedestrian injury and vehicle accidents, experts at the Johns Hopkins Bloomberg School of Public Health, the School of Nursing, the School of Medicine and Johns Hopkins Hospital have teamed up with the Maryland Motor Vehicle Administration's Highway Safety Office to launch the East Baltimore Pedestrian Safety Campaign.

The campaign kicked off Tuesday with an afternoon rally in East Baltimore, which included remarks from Daniel G. Ennis, senior vice president for finance and administration; Patricia M. Davidson, dean of the School of Nursing; Michael J. Klag, dean of the School of Public Health; Andrea C. Gielen, director of the Center for Injury Research and Policy; and William Johnson, director of the Baltimore City Department of Transportation.

The campaign was initiated by the office of Johns Hopkins University President Ronald J. Daniels and developed by the Johns Hopkins Center for Injury Research and Policy at the School of Public Health in response to an increasing number of accidents in and around the university's East Baltimore campus.

"Seven hundred pedestrians are hit and injured by a vehicle every year in Baltimore City," Klag said. "The victims of these accidents are innocent, unsuspecting children and adults of all ages and ethnicities, and in most cases drivers and pedestrians are equally at fault. Our mission at the School of Public Health is to save lives, in places near and far, including our own backyard."

The message and strategy are based on several formative research studies, including a online survey that received more than 3,900 responses; an observational behavior study; focus group discussions; and literature reviews. Creative materials and messages were created by the Bloomberg School of Public Health Center for Communication Programs.

"We are grateful for the funding and support from the MVA's Highway Safety Office," Gielen said. "With 4,000 pedestrian deaths a year in the U.S., attributed often to distracted driving and pedestrian error, and over 100 deaths a year in Maryland, it's time to change those statistics." 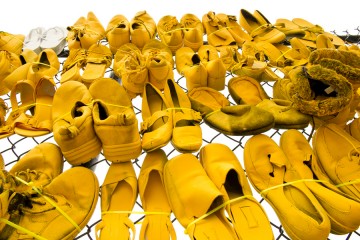